The Sun is a Variable Star

That's right, I said it, and I'm not the only one. Officials at NASA are saying it too. It's one of the reasons we launched the Solar Dynamics Observatory last week, to study our dynamic changing star, the Sun. "Understanding solar variability is crucial," says Judith Lean of the Naval Research Lab in Washington DC. "Our modern way of life depends upon it."

We depend on a complex network of high-tech systems for the basics of daily life. Power grids, GPS navigation, air travel, financial services and emergency radio communications can all be knocked out by intense solar activity. All this has led us to pay a lot closer attention to the daily activity of the Sun.

For several hundred years we've kept track of the number of sunspots on the surface of the Sun, revealing what most people have heard of as the '11-year sunspot cycle'. "It's not even 11 years," says Lika Guhathakurtha, of NASA headquarters, Washington, DC. "The cycle ranges in length from 9 to 12 years. Some cycles are intense, with many sunspots and solar flares; others are mild, with relatively little solar activity. In the 17th century, during a period called the 'Maunder Minimum,' the cycle appeared to stop altogether for about 70 years and no one knows why."

The last solar minimum, between 2008-2009, was surprisingly deep. The fact that no one expected that, or can explain it, just shows how far we have to go in our understanding of the Sun's variability.

More dramatic than the sunspot variations are the sudden and violent eruptions the Sun can produce on any given day. Solar flares explode with the power of a billion atomic bombs. Coronal mass ejections (CMEs), clouds of magnetized gas big enough to swallow the Earth break away from the stellar surface. Holes in the sun's atmosphere spew million mph blasts of solar wind. Our Sun is anything but the stable, constant, benevolent character we give him credit for. 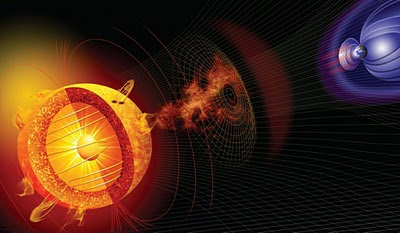 This image is not to scale, but is a pretty dramatic representation of the violent nature of the Sun
and its affect on the Earth. Credit: Science@NASA
When a solar blast hits the Earth's atmosphere the energy can light up the sky as aurora. If you've ever seen the 'Northern Lights', as we call them in the northern hemisphere, really put on a show, it is something you never forget. It's as close to seeing real magic before your eyes as you can get.

EARTH-SUN WEATHER ALERT!
This morning, Feb. 14th, one and possibly two CMEs billowed over the sun's western limb. The CMEs were not directed at Earth, so our planet should feel no effects from the expanding clouds. But sky watchers at high-latitudes should be on the alert for auroras on Feb. 14th and 15th. That's when a solar wind stream flowing from a coronal hole on the sun is expected to reach Earth. NOAA forecasters estimate a 30% to 35% chance of minor geomagnetic storming during the late hours of Feb. 14th and 15th. The activity could descend to northern-tier US states such as Minnesota and Wisconsin. Canada and Alaska are better bets. Hey, maybe the sky over the Olympics will glow tonight! 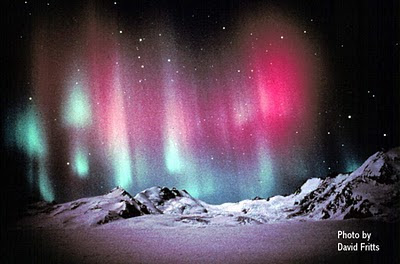 Isaac Asimov, in one of his non-fiction books (on Astronomy, I think) in the 1960s, also mentioned that the Sun is a variable star.