File this one under "one more thing that requires us to re-learn what we learned in school about galaxies". You've probably seen the "Hubble sequence" in astronomy books. It looks like a tuning fork, and has been thought of as a way not only to describe and classify galaxies, but possibly explain their evolutionary tracks as well. The original scheme, named for Edwin Hubble, was based on galaxies relatively close by in space. 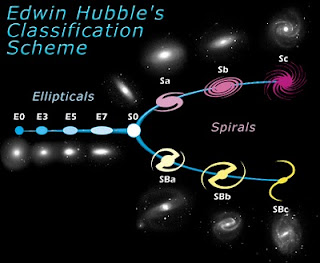 With more powerful modern telescopes able to image galaxies at much greater distances, and further back in time, astronomers have been constructing a new Hubble sequence for populations of galaxies that existed when the Universe was much younger, and find it to be remarkably different. The image below demonstrates the differences in galaxy morphology and the proportion of types between local galaxies and those six billion light years away. 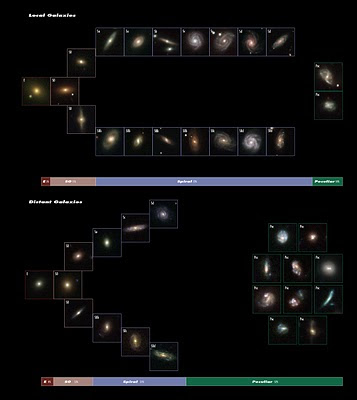 
The two sections show how many more peculiar shaped galaxies (marked Pec) are seen among distant galaxies, as opposed to local galaxies. Researchers found that 3 percent of galaxies were elliptical (marked E), 15 percent lenticular (marked S0), 72 percent spiral (marked Sa to Sd, or SBb to SBd) and 10 percent peculiar (marked Pec) among local (younger) galaxies.
The bottom half of the image represents the make up of the distant galaxies (six billion years ago), and shows much larger fraction of peculiar galaxies. The census found 4 percent of distant galaxies were elliptical, 13 percent lenticular, 31 percent spiral and 52 percent peculiar.
This implies that many of the peculiar galaxies ultimately become large spirals. This is contrary to the widely held opinion that galaxy mergers result in the formation of elliptical galaxies. According to the 'spiral rebuilding' hypothesis, devised by the astronomers François Hammer, Rodney Delgado-Serrano and their group, this is due to the large number of major, gas-rich galaxy mergers between galaxies that were previously labeled 'peculiar' in the distant Universe. They believe the Andromeda galaxy formed in this manner.
Collisions and mergers between galaxies give rise to enormous new galaxies and, although it was commonly believed that galaxy mergers decreased significantly eight billion years ago, this new result also suggests that mergers were still occurring frequently after that time; up to as recently as four billion years ago.
Another example of the scientific process at work. Our ideas, and the things we thought we knew before, get revised and improved as more and better data becomes available. And publishers must continuously update text books to reflect today's understanding of the Universe we live in.
Posted by Big Mike