On May 21, 1860 a nova burst forth in the constellation Scorpius. This nova was notable in the fact that it seemed lie either in or in our direct line of sight with the globular cluster NGC 6093, also known as Messier 80 (M80). At peak brightness it shone at magnitude 7.0, brighter than the rest of the entire cluster. It faded more rapidly than a 'typical' nova and disappeared. The nova was given the variable star designation T Scorpii and hasn't been seen or heard from since.

In recent years, studies of globular clusters have yielded some surprising results, among them a class of stars called 'blue straggler stars'. Blue straggler stars (BSSs) are stars observed to be hotter and bluer than other stars with the same luminosity in their environment. As such, they appear to be much younger than the rest of the stars around them.  This presents a problem for stellar evolution theory, since all the stars in a cluster ae believed to have formed at roughly the same time, so they should all be the same age and have evolved differently mainly (if not only) because of their initial mass.

The three main theories suggested that could produce such stars are: (1) collisions between stars in clusters or (2) mass transfer between, or the merger of components of short-period binaries, or (3) the progenitors of BSSs are formed in primordial triple star systems. Processes such as tidal friction might create very close inner binaries. Angular momentum loss in a magnetized wind or stellar evolution could then lead to the merger of these binaries, or to mass transfer between them, ultimately producing BSSs. 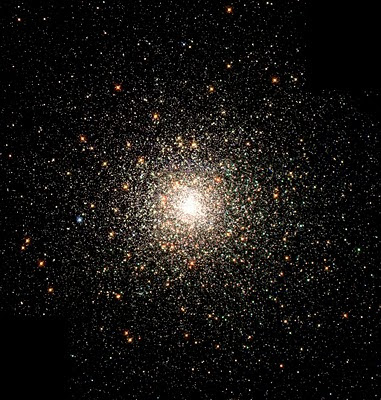 Star clusters, both open and globular, are great astrophysical laboratories for astronomers, because all the stars are assumed to be at roughly the same distance and approximately the same age, so differences in the population of stars are assumed to be real, not the result of how far away they are or how old. These blue stragglers are just one hot topic that has caused astronomers to look at clusters like M80 much closer with space telescopes like Chandra and Hubble space telescopes.

Recently, astronomers studying stellar populations in M80 in the ultraviolet, using the HST, were able to identify most of the known x-ray sources in the core of the cluster. While the main point of their investigation was to study the populations of BSS's, one of these sources happened to be a dwarf nova in outburst at the time of the observations. More interesting than that, it appears to be consistent with the location of the 1860 nova, T Scorpii. Given its position, X-ray and UV brightness and variability, this source is almost certainly the true counterpart to T Sco. After 150 years we have finally found an old friend.