Normally I wouldn't do this, but this story has propagated itself so widely through the internet and blogosphere I feel I have to chime in, if for no other reason than to help set the record straight. So what you are about to read is a story about a Tweet about a blog, about a blog, about the other blog, about several news articles, about a press release, about a research paper about...a variable star. 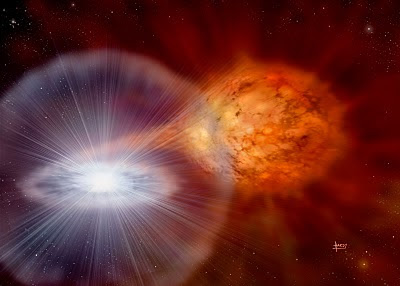 It all started last week when Edward Sion and his team from Villanova announced results of research they had done on the recurrent nova, T Pyxidis. Among other things, they claimed this recurrent nova may be at or near the tipping point in its evolution, and that it will someday (soon) become a supernova. They also re-estimated the distance to T Pyx as being much closer than thought before, approximately 3300 light years distant. Then the misinformation bomb was dropped, as the last bit of their press release states: 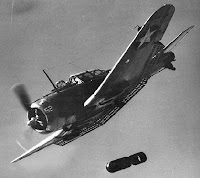 "...gamma radiation emitted by the supernova would fry the Earth, dumping as much gamma radiation (~100,000 erg/square centimeter) into our planet, which is equivalent to the gamma ray input of 1000 solar flares simultaneously."

Even though these claims were disputed at the press conference by other supernovae experts in attendance, namely Alex Filippenko, the genie was out of the bottle and before you could say, "Wait, you don't understand!", the popular press was claiming the end of the world was near.

The Daily Telegraph ran with the headline Earth 'to be wiped out' by supernova explosion, The Sun ran The death star, and bloggers began trying to undo the damage. Unfortunately, they managed to splurt out some erroneous or misleading information of their own.

First, let me begin by saying, astronomers do not really know for sure what the progenitors of supernovae explosions are. We have some very convincing arguments and theories, but there are still entire astronomical conferences held on this subject each year, presenting differing points of view based on new observations and models.

The main reason they are so interesting to astronomers is because type 1A supernovae are used as standard candles to determine the distances to galaxies too far away to estimate their distance any other way. All of our theories on the history and future of the Universe are based largely on measurements of galaxies at high redshifts. The whole theory of the acceleration of the expansion of space is based on galaxies not behaving as predicted, based on measurements of distance based on...you guessed it, type 1A supernovae measurements.

The connection between supernovae and recurrent novae is not firmly established. Yes, they MAY be part of the population of progenitor systems that eventually become supernovae, but we don't know this for sure. If they are, well that makes them a much more interesting type of variable star, which also makes it easier to obtain observing time on a space telescope, or a grant to do research on them. So for those studying recurrent novae this is a convenient connection to try to make. After all, refining the cosmological distance scale and the expansion of the Universe, and how that relates to dark matter and dark energy are some of the hot, sexy topics in astronomical research these days.

Claiming a supernova could release as much gamma radiation as Scion and colleagues claimed is factually incorrect. Phil Plait does an excellent job of explaining the relative damages a supernova or a gamma-ray burst in our galaxy could do to the Earth in his book 'Death From the Skies', and a supernova explosion at that distance has no chance of damaging our planet.

Unfortunately, Phil did manage to get some of the facts about recurrent novae wrong in his blog rebuffing Scion's claims when he wrote, "Lots of recurrent novae are known, and are fairly well understood."

Not exactly. The currently known recurrent novae are T Pyx, IM Nor, CI Aql, V2487 Oph, U Sco, V394 CrA, T CrB, RS Oph, V745 Sco, and V3890 Sgr. That is only ten stars. Out of the billions of stars in our galaxy, thousands of known cataclysmic variables and hundreds of known galactic novae, ten are known to be recurrent novae. Recurrent novae, like R CrB type stars are actually quite a rare phenomena, as far as we know.

If they were fairly well understood, the definitive paper to date on the subject of their history and behavior, Comprehensive Photometric Histories of All Known Galactic Recurrent Novae by Bradley E. Schaefer, would not still be asking at its heart: What is the death rate of RNe in our galaxy, are the white dwarfs gaining or losing mass over each eruption cycle, and whether or not RNe can be the progenitors of Type Ia supernovae.

Given a little time to reconsider what he wrote, I'm sure Phil would change that sentence. On the other hand, I have to give him credit for coining one of 2010's leading candidates for 'best skeptical science phrase' when he came up with "disaster-porn".

"There was no need to disaster-porn this release up the way it was done. Recurrent novae and Type Ia supernovae are fascinating, well worth our attention for any number of reasons including of course their potential danger."

My friend, Ian O'Neill, has commented on this situation also, on the Discovery Space News and AstroEngine.

The last bit of misinformation that really needs to be adrressed before leaving this subject, is the notion that any of this will happen any time soon. The title of the press release, "The long overdue recurrent nova T Pyxidis: soon to be a Type 1A supernova", was as misleading as the facts presented.

Soon on human, everyday-guy-on-the-street terms, means this week or this year. When astronomers use the word 'soon' or the phrase 'in a short time' they can and do usually mean tens of thousands or millions of years. Not much at all happens soon with recurrent novae, that is one of the reasons we know so little about them. Recurrent nova eruptions happen on human time scales of decades or possibly once per 100 years. To astronomers these are relatively short time scales, as compared to the thousands or millions of years between classical nova eruptions or the billions of years it takes for most stars to evolve and show any change at all. But that means that since we've been paying attention and monitoring the sky with cameras and telescopes keeping records, we've only seen these recurrent novae go into outburst a few times in history.

In fact, if you now the story of T Pyx, you know that one of the things that makes it interesting is the fact that it is overdue for a recurrent novae outburst. If it had kept to its usual pattern it would have already erupted some time ago. But if you read the Schaefer paper, he explains that T Pyx is actually evolving into a new type system and may not erupt again for hundreds of years, and "soon" won't be a recurrent nova at all.

"We now realize that what has happened is that the T Pyx accretion rate dropped substantially soon after the time of the last eruption, so it will be a long time until the next eruption (Schaefer 2005). Indeed, a more detailed accounting that includes the recent declines since 2005 plus the associated larger trigger mass implies that T Pyx won’t erupt for many centuries (Schaefer et al. 2009). Also, with the likely continuing decline in accretion, T Pyx will soon be going into hibernation, and thus will not suffer any further RN events for almost a million years (Schaefer et al. 2009). That is, T Pyx has stopped being a recurrent nova."

Recurrent novae are rare and beautiful beasts in the cataclysmic variable zoo. Their eruptions and behavior are interesting enough to garner our attention. There really is no need to "disaster-porn" their stories to make them interesting to the astronomical community or the public.

Brad Schaefer is a very enthusiastic and engaging speaker. If you haven't heard this before, check out my interview with him on Slacker Astronomy where we talk about recurrent novae, and T Pyx.
Posted by Big Mike

Excellent! I'll be linking to this from http://2012hoax.org/supernova

The "2012 doomsday" nuts have already picked up on this story.