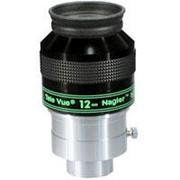 If you are a visual observer, the eyepieces in your arsenal are as important as the optical tube or mount. One of my goals has always been to find the perfect combination of the fewest number of eyepieces to be able to handle all my typical observing requirements. I don't like to spend time changing eyepieces and refocusing. I want to observe, not focus and fiddle around. My search for the perfect combination of eyepieces for variable star observing has had episodes of experimentation and expense followed by long periods of satisfaction and observing action.

After learning the capabilities and limitations of my first set of standard Plossl eyepieces I turned to the TeleVue brand to get superior quality eyepieces that had longer eye relief and a wider true field of view.

Eye relief is simply the distance between your eye and the lens of the EP where you can comfortably and effectively view what you are looking at. If you've ever stuck your eyeball practically on top of the lens of a inexpensive, short focal length, short eye relief EP to see into the tiny peep hole, you know this is not how you want to spend two to four hours a night 100 times a year.

True FOV is the area of sky you can view in any particular eyepiece/telescope combination. When you are making variable star estimates, the larger the true field of view the better chance your comparison stars will fall in the FOV. Generally speaking, the brighter the variable and comparison stars, the further spread out they are on the sky. So an eyepiece that can show you a larger chunk of sky is very helpful.

You may notice I haven't talked at all about magnification yet. That's mostly because when you are looking at stars they always just look like points of light, unlike planets or the Moon, which get bigger and dimmer with more magnification. The real advantage of higher magnification for star viewing is it makes the sky background darker, so you can see fainter stars. This usually comes at the cost of FOV. Generally speaking, the higher the magnification, the smaller the FOV.

There is a practical limit to how much you can magnify celestial objects in any telescope. For short focal ratio telescopes 30x per inch of aperture is about right. For longer f ratios, like the f/10 Schmidt Cassegrains, 20-25x per inch of aperture is more realistic. It is rare for any telescope to be abe to use more than 400x ever. I've only experienced a dozen nights where I thought 350x was reasonable.

That never stopped me from buying a bunch of eyepieces that would deliver more magnification! I've had everything from 5mm (600x!!) to 10mm (300x) and eventually sold or traded them all away because they never came out of the eyepiece box. My 7mm Nagler was a great eyepiece, but I only used it a few times in ten years, mostly to view Mars, Jupiter and Saturn on those exceptionally rare nights of almost perfect seeing. 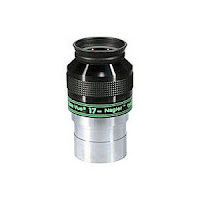 As you can imagine, sorting through all these factors has taken some time. For almost a decade my two "go to" EPs have been 12mm and 17mm Nagler Type 4's. The 12mm gave me .33 degrees of sky at 250x, which was perfect for the 12" LX200 telescope. It's about as much magnification as you can really use on an average to good night, and 1/3 of a degree is a large enough piece of sky to cover a typical chart I would use to observe faint cataclysmic variables. The 17mm Nagler had an awesomely comfortable eye relief. I could observe all night long with that eyepiece- I loved it. It delivered .46 degrees of sky at a generous magnification of 176x. I could see almost as faint in the 17mm as the 12mm on average nights, but the lower magnification delivered more pleasant star images in fair to poor seeing. It also weighs 5 pounds! Think about that before you buy one. You may need to add counter weights if you use it.


Another thing I loved about these eyepieces was the adjustable click stop eyeguard. They are a handy light shield built right into the housing of the EP to position your eye and block any stray light from getting in to mar the view. Every EP should have this.


For observing Mira stars I still needed something with a much lower magnification and wider FOV. These stars can range from the very faintest I can see, 14th to 15th magnitude, all the way up to 7th magnitude. I needed something to cover the mid and top ranges of these stars. I eventually settled on mounting an 80mm short tube refractor on the LX200, but this was only useful down to about mag 10.5 or so. The real answer to this issue was the TeleVue 55mm Plossl. It gives me almost a full degree of sky (.92 degrees) at 55x. I can see down to 13th magnitude easily, and observe stars as bright as 9th magnitude while still having some useful comparison stars in the FOV. Anything brighter is perfect for the 80mm refractor and its generous FOV. 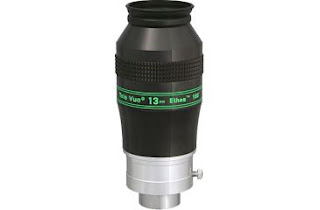 I probably could have gone on forever, blissfully, with this combination of EPs, but at the Texas Star Party in 2011, I was able to borrow a 13mm Ethos EP from a friend and using it in my telescope was a life altering experience. I couldn't believe how much larger the FOV was. It's ridiculous! You have to move your head around to take it all in. And the crisp, flat, pinpoint star images it produces are stunning, even compared to the near perfection of the Nagler type EPs I'd come to love. I had to own a set.


But I really had no desire to give up my 12mm and 17mm Naglers. There really was nothing wrong with them and after trying dozens of EPs I had stuck with these for a decade. I have to admit, they were sort of like old friends. After 50,000 variable star observations we'd grown close. So I thought I would try to get a little more oomph out of my telescope by getting the 10mm Ethos. This would give me 300x and the same 1/3 degree of sky the 12mm Nagler did. Hopefully, I could use it as my new go to EP for faint CVs because the added magnification would give me a darker sky background. And for those really good nights I bought the 8mm Ethos. A whopping 375x with still a 1/4 degree FOV. What could be better? I could have the best of both worlds.


I settled in for a few months with the new set of EPs and found myself, as before, using the 10mm once in a while and the 8mm almost never. I don't know why I thought the Ethos EPs were going to make the sky conditions better. They are just eyepieces, not atmospheric stabilization devices! I was back to using the old-faithful 12mm and 17mm Naglers in no time. It finally dawned on me what an idiot I was after the final night of the Cherry Springs Star Party when I realized I'd never even taken either of the new Ethos EPs out of the case. I had $1350.00 invested in two EPs I wasn't using. 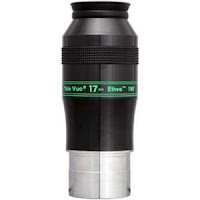 So I took the plunge. I traded in the Naglers and the Ethos EPs and came home from Cherry Springs with just three EPs in the case. A new 13mm Ethos, a new 17mm Ethos and the trusty TeleVue 55mm Plossl. It didn't take me long to get used to the idea of using these fantastic new eyepieces as my trusty companions at the telescope. They are both simply stunning performers.

The weather has been warm and dry and unusually clear at night for summer. I have had some of the best viewing in the 12" I can recall in the last four or five years. I have been able to see as faint as 16th magnitude on several nights with the new EPs.

I've had several nights of very exceptional seeing where I thought to myself, "You know, Self, we could probably use at least one more eyepiece, maybe a 10mm to give us 300x for nights like this." I know, it's a disease. But this time I told myself I'm not going to spend $600.00 or more for an EP I will only use on special occasions. Besides, the situations I want 300x for don't generally require a large FOV. I don't need a Nagler or Ethos EP to see extremely faint cataclysmic variables, or to view Saturn or Jupiter at high power. 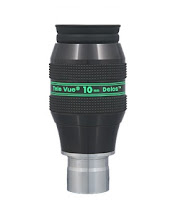 So I decided to try out a TeleVue Delos 10mm. It still has a generous apparent FOV of 72 degrees, which yields .24 degrees true FOV and 300x in my 3000mm focal length telescope. I've only had it long enough to use at the telescope for one night, but I think we have a winner. It still cost $370.00, but that is a little more than half what a 10mm Ethos would cost, and I just can't do that again.

The Delos has a new kind of adjustable eyeguard that slides into place and twist locks once you have determined the perfect place for it in relation to the lens. This is almost a requirement for this EP. The Delos is very sensitive to eye placement. If you position your eye pupil too far in or too far out you experience edge darkening and field loss. This is not a star party eyepiece for the general public. It takes a pretty experienced observer to get the most out of this complex combination of elements.  But it is a very good quality EP with no ghosting and it delivers great definition on those really good nights at 300x. I think I'm done buying EPs for a long time...or at least until Al Nagler comes up with a new exotic glass and lens combination.