As I wrote in Supernova Alphabet Soup in late December, each year there is an unofficial contest here at Simostronomy, where we wait in anxious anticipation of the first named supernova of the new year. This year's winner has finally been announced, SN 2012A was discovered on January 7th by Bob Moore, Jack Newton and Tim Puckett shining at magnitude 14.6 in galaxy NGC 3239. The variable was designated PSN J10250739+1709146 when it was posted at the Central Bureau's Transient Object Confirmation Page webpage, and has now been designated SN 2012A based on spectroscopic confirmation. 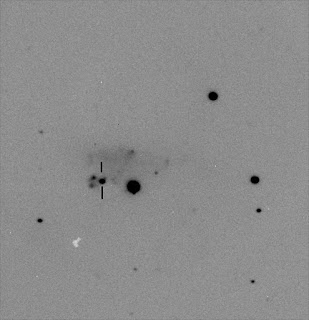 This is another fairly bright supernova caught early in its eruption, so we are off to a flying start for 2012. My own observation on January 11th of 13.748V, taken with one of the AAVSOnet telescopes, shows the supernova has brightened considerably since discovery.

NGC 3239, also known as ARP 263, is a highly disturbed and irregular galaxy. It is located in the constellation Leo, at a distance of about 49 million light-years. The galaxy shows the effects of interaction with another galaxy. 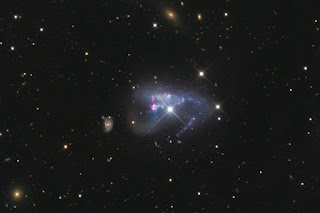