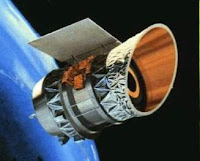 The Infrared Astronomical Satellite (IRAS) was the first-ever space-based observatory to perform a surveyof the entire sky at infrared wavelengths. Launched on January 25, 1983, its mission lasted ten months. The telescope was a joint project of the United States (NASA), the Netherlands (NIVR), and the United Kingdom (SERC).

It discovered about 350,000 sources, many of which are still awaiting identification. About 75,000 of those are believed to be starburst galaxies, still in their star-formation stage. Many other sources are young stars with disks of dust around them, possibly the early stage of a planetary system formation.

Many of the IRAS sources are embedded protostars in dust clouds and star forming regions. Its incredible the number of objects that were discovered by IRAS!