Saturday morning I made the 90 minute drive to Michigan State University to participate in a meeting on variable stars, hosted by Dr. Horace Smith. I arrived plenty early and got to chat informally with Horace and one of his graduate students, Charles Kuehn.

The MSU campus is beautiful in spring, summer and fall. Unfortunately, this trip was in March, part of that ugly, maddening season which should be called late winter. We have six seasons here in Michigan: spring (approximately one week), summer, fall (the best season), early winter, mid-winter and late winter (November - April). All things considered it was a nice day. I wore a sport coat and turtleneck; that was enough for the walk from the parking structure to the Biomedical and Physical Sciences Building.

Horace Smith is a bit of a legend in variable star astronomy. He wrote "the book" on RR Lyrae variables, a subject of which I am embarrassingly uninformed. He was friendly and gracious, and put me at ease right away. He's basically a big teddy bear of a man, with a wizened gray beard, a perfect smile and a pleasing gravelly voice. I liked him immediately.

Once everyone arrived, Horace greeted us all and began with an overview of  40 years of variable star research at the MSU observatory. They have a Boller and Chivens 24" telescope that has done a yeoman's job of serving faculty and student research for 40 years. Their primary emphasis is the study of variable stars, particularly pulsating variable stars, which obviously include RR Lyrae variable stars, as well as Delta Scuti stars. Much of the observing is carried out by graduate students and undergraduates.

My presentation was next. I talked about the Z CamPaign, which I have written about here before, and will no doubt write more about as the research progresses. It was nice to have some early results to present, now that the observing campaign has been going for a while. I thought for a minute, Horace must be a baseball fan. He led off the inning and had confidence enough in me to make me the #2 batter.

Bruce Hrivnak, from Valparaiso College, batting third, gave a great talk on variability in highly evolved stars and planetary nebulae. Prof. Hrivnak has been actively engaged in the identification and study of "proto-planetary nebulae", objects in transition between the asymptotic giant branch and planetary nebula phases in the evolution of stars. This is a short-lived phase in the lifetime of these stars, a few tens of thousand years, near the end of the life of most stars. During this nebular phase, the star becomes enshrouded in an expanding shell of gas and dust. Woo-hoo!, the observable effects of stellar evolution! Simo-readers know the Simostronomer loves this kind of stuff!

Larry Molnar, from Calvin College gave a great talk on a research based project his students were involved in discovering and classifying W UMa eclipsing binaries. These systems are the most common variable stars in the galaxy, and most of these were actually discovered serendipitously while students were doing asteroid observations. As Larry presented the new discoveries, I was checking to see if any of them were entered into VSX, the International Variable Star Index. It appears they have discovered several previously unknown variables. Larry hit a solid double with a run batted in.

Nancy Morrison hit a grand slam with her talk on the long-term spectroscopic monitoring of Rigel. I didn't even know Rigel was a variable! But judging by the results she presented, Rigel shows obvious P-Cygni emission spectroscopic characteristics, but only about 40% of the time. There were long and frequent periods of absorption spectra. Translation- there is a lot going on here, with a naked eye star, that most of us never knew! I was a little in awe of Nancy. She is a serious over-the-top genius type.

After a break for coffee and a discussion of the poster papers on the back wall, the second inning was all about globular clusters.

Andy Layden, from Bowling Green State University, began the discussion with a review of results of studies of long period variables in globular clusters.  Most variable star people observing globular clusters are working on RR Lyrae stars, but Andy and one of his students showed that there are some other interesting long period variables in the clusters they were observing.

While Andy was doing his talk, I looked up his publication references, and lo and behold, he has collaborated with our good Slacker Astronomy friend, Doug Welch. The Internet shrinks the world in so many ways. Andy seemed to be a fascinating guy, but we didn't get time to chat. 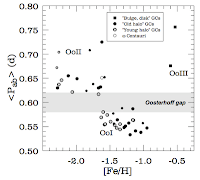 Robert Miller talked about his love of observing, especially at McDonald Observatory with the 82-inch telescope. Robert's collaborators are working on pulsating white dwarfs, but he would be happy if they were studying just about anything. Robert is a true observer, who wants to play with the equipment and the software, and leave the analysis to others. His pictures of the observatory were of the detectors, the domes at sunset and the software settling in on a period from Fourier analysis. Robert is a sick puppy I can totally relate to.

Being an amateur astronomer, I have the choice to avoid whatever aspects of astronomy don't interest me, and I would have to put statistical analysis of data sets with missing data at or near the top of that list. If the data discussed in the presentation had been astronomical data I might have tried to pay attention, but it wasn't. I understood the basic message of this presentation, but being a Neanderthal statistician, I really didn't care. zzzzzzzzzzzz... is there still coffee available? You know that feeling of the head bob, oh my god, I hope I wasn't snoring...yea, I did the head bob.

I woke up in time to see one of Andy's students present the preliminary results of her thesis paper on long period variables in the globular cluster NGC 6553. Nothing Earth-shattering, but good, solid science done by a well-taught student observer.

After the meeting we were invited to go break bread with Horace at a campus favorite pizza joint. I've been to enough meetings to know that this is where the interesting, fun and funny stuff happens. As usual, that was the case, and most of the content of those discussions is off limits for the Simoblog.

It was a great day, an easy drive home and now I am sitting here writing about it all. With any luck, you don't look at this the same way I look at statistical analysis!
Posted by Big Mike