The Nearest Variable Star- Our Sun

Most stars are so far away that even in the largest telescopes they appear as pinpoints of light. But our Sun is comfortably close. Close enough that we can make out the solar disk with the unaided eye. So close we can feel the radiation from it when we look up on a sunny day. This gives us the opportunity to study a star, our Sun in much greater detail than we can study any other star.

So what do we know about our Sun? First thing—it’s big. Its diameter is 1,329,000 km, about 109 Earths stretched end to end. You could fit 1.3 million Earths into the volume of the Sun. The Sun is mostly hydrogen, about 71% by mass, 27% helium, with heavier elements making up the remaining 2%. The energy in its core, produced by nuclear reactions, is transferred to the surface layer, the photosphere, by radiation until it gets about 2/3 of the way to the surface. Then it is carried the rest of the way through convection. Remarkably, it takes about 10 million years for energy created in the core to make it to the surface of the Sun. The temperature in the core of the Sun is estimated to be 15.6 million degrees Kelvin. The temperature at the surface is around 5700 degrees Kelvin.

The Sun is not a solid body like the Earth, so different regions rotate at different rates. At the equator the Sun rotates one full turn in 25 days. At 40 degrees latitude it takes 27-28 days, and near the poles the period is 33.5 days. This differential plays an important part in creating some of the Sun’s most active and interesting features.

The calm, steady, warming face of the Sun as seen to the unaided eye belies a roiling, boiling, turbulent pandemonium of activity. Through even a small telescope, the Sun presents some very interesting, constantly changing features.

WARNING: Never look directly at the Sun with a telescope. Improper use of a telescope or binoculars to observe the Sun will result in blindness. Always use approved solar filters, or project the image of the Sun onto a screen.

Photo credit: NASA
The most obvious features visible in a small telescope are sunspots. Sunspots are areas on the photosphere that appear dark because they are cooler than the surrounding areas. Most well developed sunspots have an inner dark region called the umbra and a larger, lighter area called the penumbera. Spots usually appear in pairs, and they tend to be confined to an area from about 40 degrees latitude to the equator. Spots can vary in size from small spots about 300 km across, called pores, to groups stretching out for 100,000 km. The largest spots usually last the longest, up to 6 months.

Sunspot activity waxes and wanes with a complex rhythm that researchers are still sorting out. The most famous rhythm is the 11-year sunspot cycle. When at maximum, the Sun may have as many as 100 sunspots on its surface. At minimum, this number may be 10 or less. The numbers of sunspots have been tracked and recorded by observers for several hundred years, revealing this approximately 11-year sunspot cycle.

In reality, this cycle ranges in length from 9 to 12 years. Some cycles are intense, while others exhibit very little solar activity. In the 17th century, during a period called the 'Maunder Minimum,' the cycle appeared to stop and the Sun went quiet for about 70 years. No one knows why. The current solar minimum is also one for the record books. The near total lack of sunspots and other activity on the Sun from 2008-2009 took everyone by surprise, which just shows how much more we have to learn to understand our nearest star. 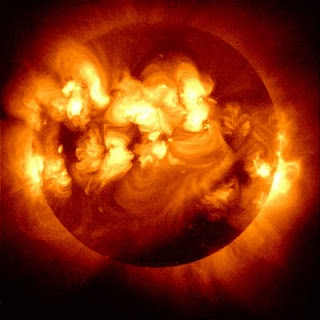 Solar flares are not well understood
Solar flares are another phenomena associated with active regions on the Sun that we don’t understand very well. These are sudden explosions releasing energy that heats up and accelerates gas in the Sun’s atmosphere. Temperatures can reach hundreds of millions of degrees and particles are ejected into space almost at the speed of light. Most of the radiation is emitted as X-rays, but flares are also observed in visible light and radio waves. Charged particles ejected by flares are potentially hazardous to humans and sensitive electronic equipment in space.

Surges of extreme ultraviolet (EUV) photons released by flares can heat Earth's upper atmosphere, causing it to "puff up" and drag down low-orbiting satellites. EUV rays also break apart atoms and molecules, creating a layer of ions in the upper atmosphere that can severely disturb radio signals. 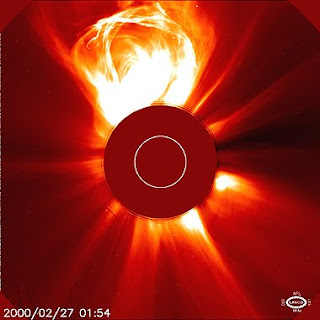 The largest scale ejection of matter from the Sun is called a coronal mass ejection (CME). Matter is shot into space at speeds ranging from 10-3000 km per second. CMEs can have a profound effect, producing a shock wave followed by a disturbance in the solar wind. When these disturbances reach the Earth they can cause geomagnetic storms. Electrical currents in the ground induced by one of these storms can damage power grids, while currents in the ionosphere can wreck satellites.  The frequency of CMEs varies with the sunspot cycle. At solar minimum there may be one CME per week. During solar maximum the average can rise to two or three per day!

When energy from the Sun interacts with the Earth’s outer atmosphere, it can excite oxygen and nitrogen molecules some 100 and 400 km above the surface, respectively, emitting a green (oxygen) or red (nitrogen) glow. This in turn excites observers on the ground, who can watch the ‘aurora borealis’ dance across the sky for hours. This is commonly referred to as the ‘Northern Lights’ in the northern hemisphere.

There may just be a glow to the north over the horizon (south if you live in the southern hemisphere); or you may see arcs or bands of light, sometimes with vertical rays spiking high into the night sky. During strong events you may witness the famous curtain effect, or the ‘coronal effect’ where all the rays appear to converge almost directly overhead.

For all its potential destructive power, life on Earth could not exist without the Sun.
It gives us the light, heat and energy we need to live. Our weather is driven by the energy from the Sun being redistributed through our atmosphere and oceans in currents and eddies. The Sun and everything in its environment, including Earth, forms an immense, dynamic, interconnected system.

When studying the effect of the Sun on the Earth, scientists measure the amount of solar energy, in all wavelengths, that falls on a given area of the top of the Earth’s atmosphere. They called this the ‘solar constant’. But, it turns out this ‘constant’ varies by as much as 0.1% over the 11-year sunspot cycle, and perhaps even more over longer periods, so now scientists use the term ‘total solar irradiance’. Although the Sun appears constant, it is a variable star that emits constantly changing energy.

Obviously, with all this interaction between the Sun and the Earth, scientists are very interested in understanding, and one day, predicting, the Sun’s activity. In February NASA launched the most advanced solar observatory ever built, the Solar Dynamics Observatory (SDO). 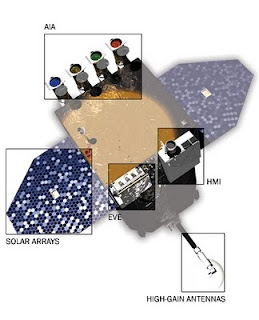 SDO is designed to probe solar variability unlike any other mission in NASA history. It will observe the sun faster, deeper, and in greater detail than any previous observatory. SDO will record IMAX-quality images of the sun every 10 seconds using a bank of multi-wavelength telescopes called the Atmospheric Imaging Assembly (AIA). SDO will also observe the sun at wavelengths where the sun is most variable, the extreme ultraviolet (EVE). The satellite’s Helioseismic Magnetic Imager (HMI) can actually look inside the sun at the solar dynamo itself.

The spacecraft is designed to transmit unprecedented amounts of data from Earth orbit. It should send back 150 million bits of data every second of every day, more than any other previous NASA Mission. To put that in perspective, that's like downloading 500,000 songs a day. NASA has set up two 59-foot satellite dishes in New Mexico just to handle that duty.

Modern telescopes and spacecraft have penetrated the sun's blinding glare and found a maelstrom of unpredictable activity. As the nearest star, the Sun is the one star in the Universe we can investigate close up. The processes going on in the Sun are the same as those at the centers of other stars in the sky. What we learn about or star we can apply to the rest of the stars in the cosmos, including the vast number of variable stars.
Posted by Big Mike