Today, two amateur astronomers from Florida detected a rare outburst of the recurrent nova U Scorpii, which set in motion satellite observations by the Hubble Space Telescope, Swift and Spitzer. The last outburst of U Scorpii occurred in February of 1999. Observers around the planet will now be observing this remarkable system intensely for the next few months trying to unlock the mysteries of white dwarfs, interacting binaries, accretion and the progenitors of Type IA supernovae. 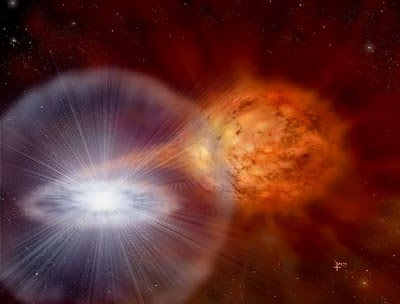 One of the remarkable things about this outburst is it was predicted in advance by Dr. Bradley Schaefer, Louisiana State University, so observers of the American Association of Variable Star Observers (AAVSO) have been closely monitoring the star since last February, waiting to detect the first signs of an eruption. This morning, AAVSO observers, Barbara Harris and Shawn Dvorak sent in notification of the outburst, sending astronomers scrambling to get ‘target of opportunity observations’ from satellites and continuous coverage from ground-based observatories. Time is a critical element, since U Sco is known to reach maximum light and start to fade again in one day.

There are only ten known recurrent novae (RNe). This, coupled with the fact that eruptions may occur only once every 10-100 years, makes observations of this rare phenomenon extremely interesting to astronomers. Recurrent novae are close binary stars where matter is accreting from the secondary star onto the surface of a white dwarf primary. Eventually this material accumulates enough to ignite a thermonuclear explosion that makes the nova eruption. ‘Classical novae’ are systems where only one such eruption has occurred in recorded history. They may indeed have recurrent eruptions, but these may occur thousands or millions of years apart. RNe have recurrence times of 10-100 years.

Recurrent novae are of particular interest to scientists because they may represent a stage in the evolution of close binary systems on their way to becoming Type IA supernovae. As mass builds up on the white dwarf they may eventually reach the tipping point, the Chandrasekhar limit. Once a white dwarf exceeds this mass it will collapse into a Type IA supernova. 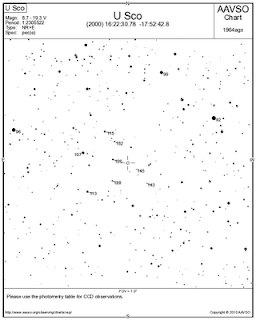 Observations from amateur astronomers are requested by the AAVSO. Data from backyard telescopes will be combined with data from mountaintop observatories and space telescopes to help unravel the secrets of these rare systems. AAVSO finder charts with comparison star sequences are available at: http://www.aavso.org/observing/charts/vsp/index.html?pickname=U%20Sco
Posted by Big Mike