The AAVSO recently announced a special observing campaign on several blazars, including the unusual variable object 3C 66A. So, what the devil is 3C 66A, and what is a blazar?

In the 1960’s advances in radio and x-ray astronomy opened our eyes to new classes of objects we’d never even imagined before. Some of these early discoveries were radio sources we believed were associated with stellar objects. The Third Cambridge Catalogue of Radio Sources (3C) is an astronomical catalogue of celestial radio sources. It was published by the Radio Astronomy Group of the University of Cambridge in 1959. Entries in this catalogue use the prefix 3C followed by a space, then the sequential discovery number, such as 3C 48. In the case of 3C 66A there are two sources very close together in the sky, so they are given an additional letter suffix, resulting in the names 3C 66A and 3C 66B.

3C 66A was one of these radio stars. As hints of their true nature began to unfold, astronomers began calling them Quasi Stellar Radio Sources, which was eventually shortened to ‘quasars’. The spectrum of 3C 273 taken during an occultation by the moon finally revealed that these radio stars were actually galaxies. Even more remarkably, these were the most distant galaxies known, billions of light years away.

Like quasars, blazars appear star-like optically. They emit energy in radio wavelengths as well as all other wavelengths up to gamma-rays. Due to their variability in optical and other wavelengths, these objects have all come to be known as Active Galactic Nuclei, or AGNs. Blazars are the most variable of all the AGNs and can change in brightness by up to a factor of 100 in a few months. BL Lacertae is the prototype of this class, and as you can guess by the name was first thought to be a variable star. 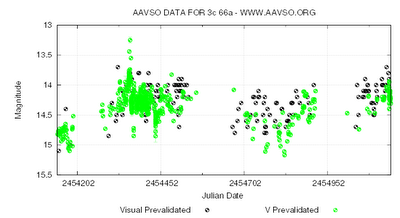 The engines that power these active galaxies are believed to be supermassive black holes residing in the nucleus of the galaxy. These super compact objects can possess the mass and gravitational pull of a million to a few billion Suns. Surrounding the massive central region is an accretion disk. Beyond that is a doughnut-shaped torus of dust and gas extending out another couple of light-years, which glows in the infrared.

Due to the physics of accretion disks, the inner disk rotates more quickly than the outer portions. The inner parts near the black hole are spinning so rapidly and are so hot that very high-energy wavelengths are generated. Gas and dust spiral in towards their eventual doom, like water circling a giant cosmic drain. A massive amount of energy is emitted when matter accretes onto the black hole via the accretion disk, and vast amounts of gravitational energy are released as the matter gets sucked down the drain and disappears from the universe.

In some AGNs, radio jets are produced which protrude perpendicular from the disk, spewing energetic particles at nearly the speed of light. Our point of view relative to these jets is what distinguishes the different types of AGN. 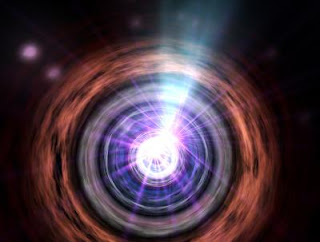 Looking at the jet straight on, right down the barrel of the beast, we see blazars and quasars. However, if the jet is not pointed in our direction, the dusty disk of the galaxy lies in our line of sight, and we see what are called Seyfert galaxies.

So the answer to our initial question, what is 3C 66A?
It is an active galactic nucleus, a quasar, a blazar, and a variable source of radiation in optical and other wavelengths, powered by a supermassive black hole in a galaxy billions of light years away.

Why has the AAVSO asked observers to monitor this crazy cosmic catastrophy?

Observations have been requested by Dr. Markus Boettcher, from Ohio University, in a study he and his colleagues are making of several blazars. These AGN are being intermittently monitored by VERITAS (the Very Energetic Radiation Imaging Telescope Array System), a four-telescope collection designed to detect sources of very high energy (VHE) gamma-rays. If a VHE gamma-ray outburst is detected by VERITAS, target-of-opportunity observations with the Newton X-ray Multi-Mirror (XMM) telescope will be triggered.

The VERITAS telescope array
Since VERITAS is not regularly monitoring the targets, optical monitoring by observers on the ground is crucial to alert the VERITAS collaboration if any one of the blazars on their list enters a high state of activity. AAVSO observers will essentially act as fire spotters, and if we see smoke, professional astronomers will turn the big guns on these blazing beasts.

Details of the campaign and the list of targets can be found in AAVSO Alert Notice 353.

I have observed 3C 66A for years. Partly because it is a variable object, but also because it is remarkable as the most distant thing I can actually see in my 12” telescope. Now I have an even better reason to watch it closely in the coming months. My observations, from my humble back yard observatory, could trigger target of opportunity observations of the XMM Newton satellite. You have to admit, that’s cool.
Posted by Big Mike