Gerry Samolyk is my observing grandfather, friend and travel gnome. He is also this year's recipient of the Astronomical League's Leslie Peltier Award.

Yea, that's a lot to explain. Let's see if I can make sense of all that.

First, the Leslie Peltier Award is one of the most coveted awards bestowed upon amateur astronomers. If you get named as a recipient you join what is essentially the 'hall of fame' of amateur astronomy. The Astronomical League website describes the award best:

The heart of amateur astronomy is observing. We can read all we want about astronomical phenomena, but the real joy in astronomy is going out under the night sky and observing the objects about which we have read. But while most of us are casual observers of the sky, looking at the same few objects over and over, a few amateur astronomers develop their observing skills to the ultimate degree. They then use these skills to make careful observations of the sky and record them for scientific analysis.

Whether the observation is done with a photometer, CCD, spectroscope, or just the human eye, the ability to find an object and record scientifically useful detail is not a common trait. To recognize the amateur astronomer who is not only able to do this, but has contributed his observations to an ongoing observing program, the Astronomical League presents the Leslie C. Peltier Award. The Peltier Award was created in 1980 and the first was awarded in 1981.

The award is named after Leslie C. Peltier, the Delphos, Ohio, amateur astronomer who Harlow Shapley, one of the League's founders, referred to as "the world's greatest nonprofessional astronomer". Born January 2, 1900, he discovered twelve new comets and four novae. But his real contribution was the over 132,000 variable star observations he made in his sixty-two year observing career. He also wrote many articles on astronomy and penned four books. To ease his observing, he built an enclosed "merry-go-round" observatory. He died in 1980.

It is in his memory, and to celebrate his life-long love of the heavens, that the Astronomical League presents the Leslie C. Peltier Award.

Some of the past recipients are: Walter Scott Houston, Rev. Robert Evans, David Levy, Don Parker, Janet Mattei, Dennis di Cicco, Roger Sinnot and Richard Berry. Gerry is now counted in among the heavy hitters in amateur astronomy, and it is a well-deserved honor.

As a member of the Milwaukee Astronomical Society many years ago, Gerry mentored a young observer, named Gene Hanson, in the fine art of visual variable star observing. Gene took his new found enthusiasm, moved to Arizona and became one of the world's leading variable star observers. When I joined the AAVSO, I was put in touch with a mentor through the AAVSO Mentor Program. He saved me untold time and mistakes by imparting his wisdom via many, many long emails. My mentor? Gene Hanson, the 2002 recipient of the Leslie Peltier Award. So I can track my observing heritage back to Gerry through Gene, making him my observing grandfather.

In fact my observing heritage can actually be traced back to the very first recipient of the Leslie Peltier Award, Ed Halbach, Gerry's mentor and inspiration.

Gerry's story and history are best told in the citation given by Roger Kolman, the AL Leslie C. Peltier Award Committee Chairman.

When informed of his selection, Gerry said: “This is quite a surprise. I'm aware that Ed Halbach was the first recipient of this award and that Bill Albrect and Walter Scott Houston (all from the MAS) had also received it. Unfortunately, I will not be able to attend the convention in NY.” Gerry will be in China chasing the Sun during the total solar eclipse.

Gerry first became interested in astronomy as a result of the early space program. He still has a copy of the summer 1958 issue of Space Journal that covered the launch of Explorer I. He first met Ed Halbach while in high school. Like so many others, he was infected by Ed's enthusiasm and energy. Ed got him involved in observing lunar occultations and grazes. In the early 1970's, Gerry started observing eclipsing stars and a few years latter, RR Lyr stars. He has followed in Ed's footsteps and has served as the observatory director for the Milwaukee Astronomical Society (MAS) since 1980. In the AAVSO, Gerry teamed up with Marvin Baldwin on the EB and RR Lyr committees. They developed a computerized system for the reduction and publication of EB times of minimum. As a result, over 15,000 times of minimum were published.

For many years Gerry did visual observing by setting up as many scopes as they had at the observatory, setting each scope on a different target and following 12 or more stars simultaneously. Over 10 years ago, he got involved with CCD photometry. Between club and personal equipment, he can run up to seven CCD rigs and continue to make time series observations on multiple targets. To date he has probably made over 250,000 observations of EB and RR Lyr stars. The Internet now allows him to set up multi-site observing campaigns coordinating with observers in Europe, Australia, and Japan. This results in very long observing runs.

Notably, on April 4th Gerry was in the twin cities for the celebration of Ed Halbach's 100th birthday.

Obviously, Gerry Samolyk is a worthy recipient of the Leslie C. Peltier Award of the Astronomical League.

We are very grateful for the support of Scott Roberts and Explore Scientific for the sponsorship of this award.

I met Gerry for the first time in 1999 when I went to my first AAVSO meeting in Hyannis, MA. Gene was there for my first meeting, and between the two of them I got an excellent indoctrination into the history, activities, people and excitement of the AAVSO. They had a fish on the line and they expertly drew me in hook, line and sinker. 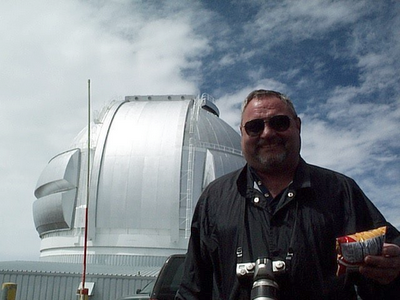 After attending my fifth AAVSO meeting, in Hawaii, Irene and I were going through the hundreds of pictures she had taken and we were astonished at how many of them featured Gerry Samolyk in one way or another. In the bar at the hotel, down by the beach where we rented snorkeling equipment, at the visitor's center on Mauna Kea, at the summit of Mauna Kea, next to me next to the Keck telescope, behind Irene at the Volcanoes National Park- he was everywhere we were!

Then we went back through our pictures of previous meetings. There he was again, in dozens of pictures of us in Massachusetts, Wisconsin and California. It was then that Irene dubbed Gerry 'our travel gnome'. He's been on trips with us to Arizona, England, Massachusetts (several times), Illinois and again to California this spring. At every meeting we go to we make sure to get pictures of Gerry now.

I remember I got a little bent out of shape over it in England. We took a long bus tour from Cambridge to Stonehenge and Avesbury that took an entire day. When we finally got back to the hotel that night I downloaded the pictures from the day onto my laptop. As we examined the images, it became painfully obvious that Irene had taken two, count them TWO, pictures of me next to the monolithic stone outcroppings. On the other hand we had a half dozen pictures of Gerry and about two dozen pictures of sheep and crows! Irene loves to do animal pictures. (No offense, Gerry.)

Irene finally confessed to Gerry in a pub one night in England that we were now purposely taking images of him and calling him our travel gnome. I think it was because she was afraid he was beginning to think she was weird, shooting pictures of him on our vacations. We all had a good laugh over it and a couple of pints.