Andrew Drake is a Research Scientist with Caltech's CACR (Center for Advanced Computer Research) in California. His astronomical interests are varied, and include exoplanet discovery, microlensing of Machos and other baryonic dark matter, Supernovae/Hypernovae and mining large data sets. He is the principle investigator for the Catalina Real-time Transient Survey.

Because one of the byproducts of the CRTS is the discovery of numerous cataclysmic variables I thought it would be interesting to have him to tell us about the methods and goals of the CRTS team, and what they are doing with all the new science coming out of their survey.

Mike: Hi Andrew. Thanks for granting this interview. Let's start off with a description of the Catalina Real-time Transient Survey, the methodology, it's science goals, and then discuss what your group is doing and what you're learning. So first, what telescopes and instruments are used for CRTS?

Andrew: It is my pleasure. The Catalina Real-time Transient Survey (CRTS) currently uses data from the Catalina Sky Survey's (CSS) 0.7m Schmidt telescope. The CSS team hunts for Near Earth Objects (NEOs) while we hunt for other kinds of stationary optical transients.

Mike: What is the observing cadence and how much of the sky do you cover?

Andrew: The Schmidt has an eight square degree fov and covers the visible sky between -30 and +70 degrees.

However, we avoid the Galactic plane by 10 degrees because of crowding. About 1200 square degrees is observed four times on each of the 21 darkest nights per lunation, to V~20.

Mike: Your interest and the science you are going after seems to relate mostly to supernovae in general and then supernovae in faint galaxies, correct? What are you hoping to learn from the survey?

Andrew: Our interest is in optical transients of all kinds. However, we are particular interested in the rare kinds of transient phenomena that can only be found through synoptic surveys covering a very large area. Two particular types of transients that have become of interest since we started the survey, supernovae in faint galaxies, and hypernovae.

Mike: In order to study these supernovae you need a way to filter out all the other stuff you're not looking for, which includes asteroids, cataclysmic variables, other types of variables, image artifacts, etc. You have to be able to classify objects quickly and accurately. I imagine that is one of the bigger challenges in your work. How do you go about doing that? 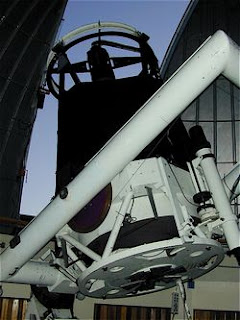 Andrew: Filtering artifacts and asteroids is perhaps the most difficult part of the survey. Fortunately most asteroids are known to the depth of our observations and can be removed using the ephemeris files that the Minor Planet Center (MPC) distributes. Additional asteroids and artifacts can be removed checking for motion, or offsets, between images. Even so, there is a balance between missing some real transients with strict filtering or allowing some junk through with looser filtering. We have never tried to filter CVs because we know many people are interested in them, particularly when they are in outburst. To improve classification we follow-up almost everything we discover with the Palomar 60" and also make this data public. Our hope is to obtain fully automated classification network to replace the final classification which still must be done by a person (gathering all data sources, cross-checking and making a decision). We hope our future automated classification will enable rapid robotic follow-up of short timescale transients.

Mike: What results have you found so far in your supernovae studies?

Andrew: One surprise to us was that a large fraction of the supernova we find are in intrinsically very faint galaxies. This is not expected because there is much more stellar mass in large galaxies and nobody has seen this before. We believe the reason this has been missed in the past is that most searches for nearby supernovae follow only a few hundred very bright galaxies. The increased SN rate in faint galaxies appears to be mainly due to an extremely high star formation rate in some low mass dwarf galaxies. One particularly interesting SN we discovered was 2008fz. 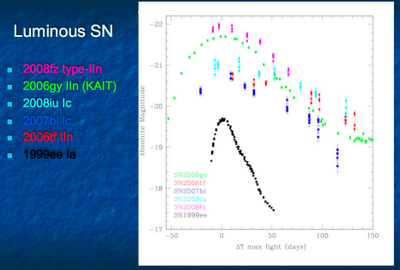 Mike: What was so special about SN2008fz? Was this a hypernova? What is the difference between a supernova and a hypernova?

Andrew: SN2008fz was a type IIn supernova discovered by CRTS and appears to be the most energetic supernova ever discovered. Such bright supernovae are often called hypernovae and are proposed to be the result of either the collapse of a massive star like Eta Carinae or an extremely massive population III star. The exact origin of hypernovae is not yet clear as few have been discovered. They up to a few magnitudes brighter thanregular type Ia and type II SN and have also been linked to exceptionally bright gamma ray bursts.

Mike: Now you've developed some tools and resources for amateurs and others to use to follow up on newly discovered CVs from CRTS. Tell us about that.

Andrew: When we classify our detections place them on a number of web pages where we hope people will find and follow them. New bright CVs are among our most common discoveries, although we include known CV outbursts also. As with all our discoveries these are made public as quickly as possible. Our hope was that people would work with us on the discoveries or at least inform us that they are following CVs, as they do with supernovae. Unfortunately, we find that they are taken from the webpages and circulated to email lists where they are quickly renamed and followed and even published under that name. Nevertheless, we are continuing to openly publish the new CV discoveries.

Mike: You're also logging data collected serendipitously on known CVs. Is there a plan to share these observations with AAVSO or other researchers? Is there maybe a project here for the CV section, or perhaps the data mining section, to convert your data into a format that can be periodically entered into the AAVSO International Database?

Andrew: Yes, as we cover a large fraction of the sky every lunation we realized that the data would regularly cover thousands of CVs and other interesting variables. We thought it may be useful for us to provide up to date measurements for known interesting objects so that CV astronomers might follow-up those that that they deem interesting. We certainly hope that the AAVSO will ingest this data.

Mike: So what are the plans for the future? Are you going to expand the project? How long do you think you will continue?

Andrew: Soon we hope to start processing the data from two additional dedicated CSS telescopes that use the same camera setup. There are also plans to expand the fields of the existing telescopes by a large factor. Depending on funding we plan to continue for three more years. Part of our goal is to make all the past CSS data public so that everyone may perform their own searches for variables, etc., among the tens of terabytes of existing images and photometry.

Mike: Well, I wish you the best of luck. Let's do this again some time. You can bring us up to date on what has developed for you and your team, and it will give us an opportunity to thank you for all the interesting CVs you're going to discover for us in the meantime!

Andrew: You are most welcome.
Posted by Big Mike