An IAU Circular landed in my email box today with a strange headline I found hard to ignore.

A double quasar? Wow, that has got to be rare. Is it the first one ever found? How did they determine its dual nature? If it already has a Sloan licence plate name, why are they just announcing this now?

I was hooked. I had to research this thing and get the whole story.

First of all, what are quasars? Where did the word come from and what does it mean?

Quasar is a sort of abbreviation for "quasi-stellar radio source". Its also common to refer to them as QSO's (quasi stellar objects). These are active galaxies at least 3 billion light years distant, some a lot further away. They have massive black holes in their centers that cause them to emit radiation in many wavelengths, including radio. Some have jets emanating from the core, perpendicular to the plane of the galaxy. They look like points of light because they are so far away. But make no mistake, these are mysterious galaxies from the early history of the universe. 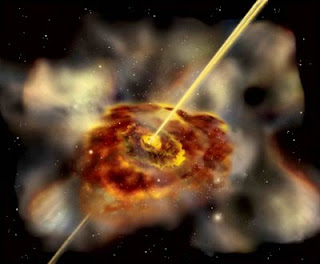 Many quasars are variable, so I've been aware of them as observing targets for a long time. In fact, several were given names in the General Catalog of Variable Stars because they were mistakenly categorized as variable stars. BL Lac and W Com come to mind immediately.

Named objects beginning with 'SDSS' are objects discovered by the Sloan Digital Sky Survey. The numbers correspond to their positions in Right Ascension and Declination on the sky. The Sloan survey has discovered most of the over 200,000 known quasars.

The spectrum of this radio-quiet QSO exhibits two broad emission-line systems at slightly different redshifts in the Sloan Digital Sky Survey optical spectrum, so it was originally thought that this might be a black hole binary QSO. The separation between the two sources is less than an arc second, so very high precision images needed to be taken to distinguish the pair and determine their distance from one another. 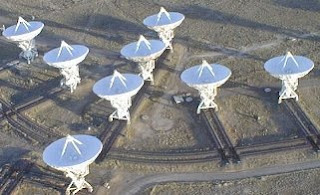 Subsequently, measurements taken with the Very Large Array, imaging in the radio regime at 8.5 GHz, revealed two sources, separated by a mere 0.97 arcseconds. The individual sources were too small to resolve. In a paper by J. M. Wrobel and A. Laor (http://lanl.arxiv.org/abs/0905.3566) it was suggested that these two sources might actually be two quasars separated by approximately 5 parsecs, instead of a binary black hole quasar. Images and measurements with more precision would be needed to make the call. 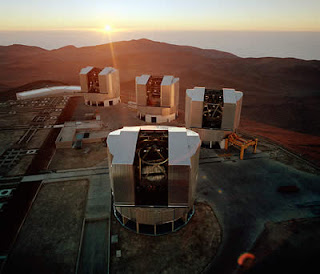 Today the call came in. A multi-national team of astronomers report on a deep K-band image taken at the European Southern Observatory using the VLT and an instrument called HAWK-1. The image shows that the object is composed of two sources at a separation of 1". Both sources consist of a nucleus plus an extended emission. These results strongly suggest that SDSS J1536+0441 is a pair of quasars, separated by 5.3 kiloparsecs, which is consistent with the recent independent finding of two compact radio sources by Wrobel and Laor.

So, is this the first double quasar ever discovered? Unfortunately, no. They are rare but there have been several discovered before. That doesn't make this story any less remarkable for me. I hope you found it interesting.
Posted by Big Mike

I have a hypothesis that the quasars owe much of their appearance to refractive lensing of the light from an opposite jet by a huge lens of gas WITHIN the quasar in http://charles_w.tripod.com/quasar.html . If this hypothesis is valid it follows that quasars viewed in a small telescope should look brighter relative to nearby stars than when viewed by large telescopes. If you know of any references that would demonstrate this, please let me know. If quasars are powered by a huge mass and have a jet they have to look different than they actually are. AGNs should also have their image distorted.
Astronomers present as if the big bang and expanding galaxies were an established fact. But actually there is no evidence that we are at the center of the Universe and the galaxies are all moving away from us other than the assumption that the cosmological red shift is a Doppler shift. There is an alternate discussion of the cause of the red shift as an interaction of the photons with atoms passed in space in http://charles_w.tripod.com/red.html .
Astronomers speak of a "young Universe". It was, of course, younger than it is now when distant stars shone. However, there is no chance at all that the Universe was as young as astronomers say when the light from those distant stars was created even if the big bang hypothesis were valid. It took the light over 13 billion years to arrive here, so it is obvious that the atoms emitting it took well over 13 billion years to get out there in that case. It does not make any difference if the atoms traveled out there from a spot near here or the ether is expanding, well over 13 billion years would have had to go by, so by now the Universe could be well over 30 billion years old in the unlikely event that there was a big bang.