I have a great mystery story for you, and what’s even better; you can help write the ending!

This story starts in the 1950’s with the discovery of the variable nature of the star EE Cephei (Cep). Astronomers noticed it fainter than normal in 1947 and again in 1952. At first it was suspected of being an R Coronae Borealis type star. These are giant Carbon-rich, Hydrogen-poor stars that exhibit unpredictable fading episodes, believed to be caused by dust forming episodes in the outer layers of these stars’ atmospheres. The dust blocks the visible light, so we see the star fade, sometimes dramatically, by up to 9 magnitudes. It can take a year or more for them to return to maximum light, where they will shine contentedly for another undetermined period before coughing up dust and fading again.

When EE Cep faded again in 1958, Italian astronomers Romano and Perissinnotto suggested it might actually be an eclipsing binary with a very long period.

Eclipsing binaries are stars that orbit around a common center of mass, and due to a line of sight effect we see them fade at regular intervals as one star passes in front of the other from our point of view. Sometimes, the alignment is so nearly edge on that we see a secondary eclipse as the smaller star of the binary pair disappears behind the primary. 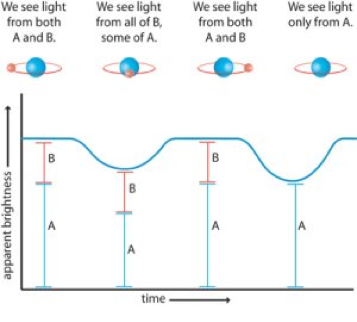 Because the orbits of these binaries are usually quite stable and the eclipses occur at regular intervals, observing eclipsing binaries is extremely helpful to astronomers in determining stellar masses, sizes, temperatures, luminosities and orbital parameters. Most have periods measured in hours, days or weeks because they are compact systems, with the stars in close proximity to each other, if not actually in contact.

There are a few eclipsing binaries whose periods are measured in years. Epsilon Aurigae and VV Cephei are two, having periods of 27 and 20 years, respectively.

The eclipsing nature of EE Cep was confirmed after eclipses were observed again in 1964 and 1969. L. Meinunger published the first ephemeris for EE Cep, establishing a period of 2049 days (5.6 years). No secondary eclipse has ever been observed.

The mysteries about this star were far from being unraveled though. One of the striking characteristics of EE Cep is the different eclipse depths and durations. Unlike many eclipsers, whose periods can be measured to 8 significant digits, and whose range in magnitudes is very predictable, all of the observed eclipses of EE Cep have been different from each other in depth and duration. The 1969 eclipse lasted longer than any other and had a flat bottom shaped light curve. Below are the eclipse data from 1997 (left) and 2003 (right).

The most popular model to explain the secondary is that of a dark, opaque, relatively thick disk around a low-mass single star or a close binary. Differences in the shape of the particular eclipses could be explained by changes in both the inclination of the disc to the line of sight, and the tilt of its cross-section to the direction of motion.

The majority of the eclipses exhibit five repeatable phases that can be explained if the secondary is a disk shaped object with a gap in the center, like a giant cosmic donut. First, atmospheric and real ingress, where the dusty disk begins to obscure the light from the primary star, and then obscures it more fully as thicker, more opaque material blocks the light from the primary. Then a sloped-bottom transit, as the primary shines through the hole in the donut as it passes in front of the star. Then finally, real and atmospheric egress, as the disc moves away from in front of the primary star.
The unique, flat-bottomed eclipse observed in 1969, can be explained by a nearly edge-on, non-tilted eclipse of the primary by the disc.

The color filter observations from the last eclipse show two increases in blue light (blue maxima) about 9 days before and after mid-eclipse. These subtle increases can be explained by the primary being a rapidly rotating Be star. These stars are darker around the equator and bluer at the poles. The reason there are two blue maxima can be explained if the disc is divided into two parts by a transparent gap. Spectroscopic observations show that the eclipsed component is a rapidly rotating Be star. 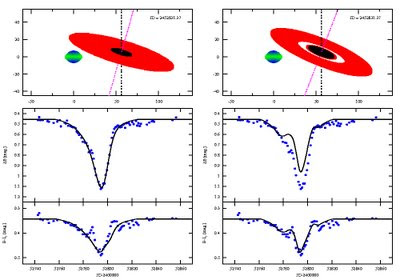 Two models of the eclipse of the fast rotating Be star in EE Cep by a solid disc (left) and by a disc with a gap (right). A flat and circular disc with r^-2 density distribution has been assumed. Top: projection of the system in the sky plane. Polar (hot) and equatorial (cool) areas of the star are shown by dark (blue) and light (green) shades respectively. Inner (opaque) and exterior (semitransparent) areas of the disc are shown by dark and light shades (black and red colours) respectively. Middle: B light curve (points) from Mikolajewski et al. (2003) with corresponding synthetic curves (lines). Bottom: B-I_C colour index from the last 2003 eclipse (points) together with synthetic fits (lines).

The issue is far from settled. The light and color variations may have more to do with the different opacities in different parts of the disk. And here is where you can help write the story of this mysterious object.

The next eclipse of EE Cephei starts right now. Mid-eclipse is predicted for January 14-15, 2009. The critical time to catch the blue maximums will fall between January 2nd and 27th. The longest eclipse lasted 60 days, so early December is the time to start taking data on this star, and observations should continue through the end of February.

If you have a CCD equipped with one or more science filters (UBVRI), astronomers at AAVSO will be very anxious to have you submit your data. If you are a visual observer, you can submit data on this eclipse also. EE Cep is normally a 10.8 magnitude star, and fades to anywhere from 11.5 to 12.5V. Thus it is easily observed with a telescope of 4” or more.

Comparison charts for this star can be downloaded from the AAVSO’s Variable Star Plotter (VSP). There is a handy one page instruction for using VSP linked right from the top of that page.

Coincidentally, Epsilon Aurigae, which is a close cousin of EE Cep, experiences one of its rare eclipses (once every 27 years!) this year too. Epsilon Aurigae is a naked eye star, and the subject of AAVSO's main IYA 2009 project.

Both stars are of interest to astronomers, and you can help sort out the mysteries, but you have to get out there and DO some astronomy.

So go on, get out there.

Thanks for your comments on my Mira piece, and putting it up at the AAVSO writers bureau. You might also like the piece I have just done on Algol.

Speaking of the AAVSO writers bureau, I have edit access, but should I let AAVSO folks nominate a post of mine, or can I put up my own posts?

The beauty of the Writers Bureau is you don't have to do anything. My
assistant and I scan the blogs every week for appropriate material.
But, if you want to publish something there on your own, I have no
problem with that, as long as it is stellar astronomy of some sort.
Variable stars and transiting exoplanets are even better. An article
on Algol would obviously be perfect for our site!

If you don't get around to it, we will probably have your article up
in a matter of days. I tend to do most new entries on Monday mornings
and one evening mid-week, whenever its cloudy.

Thanks for everything. Keep up the fine work.

hi, mike! i'd like to post your story on UT and i'm looking for permission to quote and use your material - complete with a link back to your posting. with your kind permission?

You didn't leave me any contact information, so I sent an email to Fraser asking him to forward my message that it was okay to use the article for UT. If you have any questions or need any clarification you can contact me at mikesimonsen at aavso dot org.

This post will be published in the Feb 09 Issue of SACnews the Official newsletter of the Saguaro Astronomy Club of Phoenix, AZ.

Hmmm, that was interesting. Looks like somethings will always remain mystery.

having it", for a wile now. Could not understand much though.

By the way, good writing style. I'd love to read more on similar topics

I have been meaning to read this and just never got a chance. Its an issue that Im very interested in, I just started reading and Im glad I did. Youre a wonderful blogger, 1 of the most effective that Ive seen. This weblog undoubtedly has some facts on topic that I just wasnt aware of. Thanks for bringing this stuff to light.
canada exporters
b2b trade leads
suppliers directory
indian trade portal