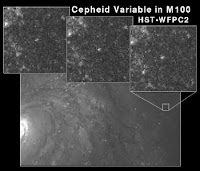 The answer then is, given the best possible conditions, with Hubble's modern equipment, we can see individual massive bright stars out to a billion light years or more. Since these massive stars tend to live for millions of years, not billions of years, massive stars visible at great distances have probably lived and died in the time it took their light to get here from there. Or, as Doug said, "ANY stars bright enough to be seen at 100's of millions of years distance are "currently" toast."
Posted by Big Mike