In October this year, the AAVSO will be holding its annual fall meeting on Nantucket, in conjunction with the Maria Mitchell Observatory, who are celebrating their 100th anniversary. I had vague notions about who Maria (pronounced Ma-RHY-uh) Mitchell was, but as I began making travel arrangements for the meeting and doing a bit of research about the island, its history and the observatory, a fascinating story unfolded I think you might enjoy.

Maria was born on Nantucket, August 1, 1818. She was the third of ten children born to William and Lydia Mitchell. Many of her cousins, aunts and uncles proved to be quite brilliant, self-taught people. Among them, Benjamin Franklin, related on her father's side of the family. 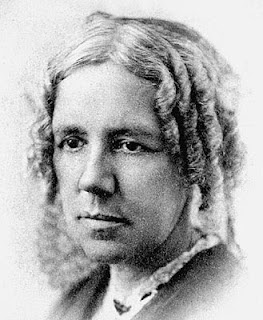 Her parents were Quakers, and as such, valued education and believed in intellectual equality of the sexes. Because many Nantucket women were responsible for taking care of the children, homes and family business while the men were away at sea for months, sometimes years, they developed into strong, independent women. Maria's father was an active amateur astronomer, who gave lectures to learned societies and showed people the Moon and other celestial objects through his back yard telescope as Maria was growing up. These facts all conspired to allow Maria to become America's first woman astronomer.

Let me remind you that for most of Maria's life, slavery in America was a fact of life and the women of Nantucket were not allowed to vote or own property. The inequality between the rights, pay and working conditions of women and men is a recurring theme in Maria Mitchell's life.

Maria's extensive home schooling, formal education and self-teaching landed her her first job at the age of sixteen as a mathematics teacher. At the age of eighteen she was offered the job as librarian for the Nantucket Atheneum. The Atheneum was not only a library which housed over 3,200 books, but it had a lecture hall, a museum room and served as a local cultural center.

Working in the Atheneum allowed her access to all the books she could devour. These included books on astronomy and celestial mechanics. Since many advanced astronomy publications and journals were written in Latin or German, she taught herself these languages so she could read more. In the end, she was able to give herself a college education, something she could not have achieved elsewhere, since women were not admitted to the best colleges in the early 1800's.

Through her father and working at the Atheneum, Maria became known to many of the prominent amateur scientists and astronomers of the day, including expert clock maker and astronomer William Bond, who became the first Harvard astronomer. On visiting the Harvard observatory in 1847 she was privileged to be one of the first people in America to observe the newly discovered planet Neptune with Bond through the observatory's fifteen inch refractor.

The event that catapulted Maria into worldwide fame was her discovery of a comet in the autumn of 1847. The only other woman to have discovered a comet before this was Caroline Herschel. "Miss Mitchell's Comet" (C/1847 T1) earned her the gold medal awarded by King Frederick VI of Denmark for the discovery of telescopic comets (those not visible to the unaided eye). This award was not without some controversy, as another astronomer, Francesco de Vico, had independently discovered the comet a couple days later, but had been able to report his finding sooner than Maria. Everything was sorted out in the end and Maria was given full credit for the discovery and the gold medal award.

Her career bloomed quickly after that. In 1848 she was elected the first woman member of the American Academy of Arts and Sciences, and to the American Society for the Advancement of Science in 1850. In 1849 she was offered a position with the U.S. Nautical Almanac Office as a 'computer' (one who does computations) of tables of positions of the planet Venus.

In 1865 she became professor of astronomy and director of the college observatory at the newly-opened Vassar College in Poughkeepsie, New York. Mitchell and her father moved into the Vassar Observatory, the first building of the college to be completed, where she had the use of a twelve-inch telescope, the third largest in the United States at that time.

Her students did original research and studied the heavens from the dome at the top of the observatory. They were frequently aroused from their sleep in their bedrooms in Main Building and made their way over to the observatory in the dark to ascend to the dome, or the roof of the building, to study Jupiter or Saturn. Mitchell continued her own research in studying the surface features of Jupiter and Saturn and photographing stars and the Sun. 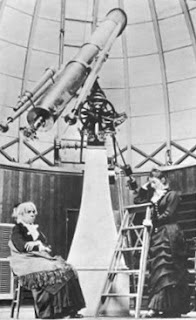 In 1869 she was the first woman elected to the American Philosophical Society. In 1873, she co-founded the American Association for the Advancement of Women and served as its president from 1874 to 1876. In 1873 she attended the first meeting of the Women's Congress. That Congress was also attended by many famous women's rights activists, including Elizabeth Cady Stanton, and Susan B. Anthony. In fact, after serving as observatory director and professor at Vassar for several years she found out that she was being paid far less than some male professors with far less experience and stature. She demanded a salary increase and got it!

She was also involved in the anti-slavery movement. She refused to wear clothes made of cotton as a protest against slavery in the South. She kept up this personal boycott even after the Civil War had ended and the slaves were freed.

Maria Mitchell retired from Vassar in 1888 because of failing health. She died June 28, 1889 of a brain disease, of all things. Friends and supporters founded the Maria Mitchell Association on Nantucket in 1902. The observatory they built on Nantucket was named in her honor. 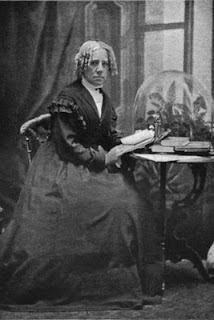 Anyway, I know my trip to Nantucket will be a little more enjoyable now that I know more about her most famous daughter. I hope you found this story as interesting and inspiring as I did.
Posted by Big Mike

I posted a revision to this article July 7, 2008 after fact checking Patrick's comment. Thank you again,Patrick.
Mike

There are some wonderful quotes from her, including the following:
"In my younger days when I was pained by half educated, loose and inaccurate ways which we all had, I used to say, ‘How much women need exact science’. But since I have known some workers in science who were not always true to the teaching of nature, who have loved self more than science, I have said, ‘How much science needs women’.”