Dwarf novae, are in fact binary systems made of a white dwarf primary and a less evolved (normal) star orbiting around each other in such close proximity that the white dwarf's gravitational attraction is actually stripping away the outer layers of its companion's atmosphere.

This cannibalized material cannot fall directly down to the surface of the white dwarf, but instead goes into orbit around it, creating a disk called an accretion disk. This disk material is so hot and releases so much energy and light, that it can be thought of almost as if it were a flat star! 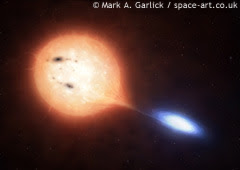 Now and then, something happens, we aren't quite sure what, that tips the balancing act and this material suddenly falls down to the surface of the white dwarf and ignites an outburst that makes the system hundreds of times brighter than it is in quiescence.

Normal, garden variety dwarf novae undergo outbursts irregularly in time scales of weeks to months to a couple years in between outbursts. Other systems may take several years or decades in between eruptions. Generally speaking, the longer it takes between outbursts, the bigger the bang.

TOADs belong to this class of rarely outbursting stars that have brighter than normal outbursts. Because they don't happen very often, and we never know when the next one will occur, astronomers are interested in studying these objects and their unusual nature.

One way to get a look at this cooler secondary star is to study the infrared light coming from it. The white dwarf and accretion disk are too hot to emit much infrared radiation (IR), so its a pretty safe bet that the IR light that gets to the telescope came from the secondary.

And what better cataclysmic variable target to try and catch this portion of the spectrum in than a system that rarely goes into outburst? So, when given the opportunity to get 'discretionary time' on the Spitzer Space Telescope, which studies the universe in the infrared portion of the electromagnetic spectrum, Steve Howell suggested they point it at one of these TOADs, WZ Sagittae, to see what they could see about the secondary of the system.

Once the data were analyzed, Steve and his team were astonished to find they couldn't see the secondary at all! What they found instead was a large, asymmetric disk of dusty material surrounding the accretion disk. Because this disk contains so little mass, it is completely invisible in optical and near-IR wavelengths. In a way, it is 'dark matter'. The pre-print paper can be read at arXiv:0805.4818v1 [astro-ph].

This discovery has implications for accretion disks in general, other interacting binaries, even the accreting black holes in active galaxies. It also raises a lot of interesting questions. Where is this dust coming from? What exactly is it made of? Do all dwarf novae have dusty rings around them?

To follow up on this discovery, Steve and his team have acquired another set of target of opportunity observations with Spitzer. AAVSO observers around the world are monitoring a list of TOADs. Once an outburst of one of the stars on the list is detected, observations with the space telescope will commence a couple weeks after the outburst, and then again several times as the system falls back to quiescence, to see if dust formation can be detected and what, if any, changes take place over time.

Check here in the future for results from this interesting pro-am collaboration.

Dwarf Novae depiction "Cataclysm III" copyright Mark A. Garlick and used with permission. Please do not use this image in any way whatsoever without first contacting the artist.
Spitzer Space Telescope image copyright NASA.

Strange. I always thought the larger star would steal matter away from the dwarf star.

I guess you learn something new everyday. ;-)