Acronyms, acronyms...doesn't anybody know how to spell any more? Every article or blog I read, every conference I attend, even watching the cable news channels, I am constantly bombarded with acronyms for everything. I rattle them off in conversation all the time without thinking, and yet I'm sure there are people listening, nodding their heads knowingly, who haven't got a clue what the heck I am talking about.

I do the same thing. My boss, a PhD astronomer, throws these things around as if they were real words and I should know what they are. I nod my head knowingly and scrape by as best I can until I have time to research them later. I usually spend about an hour or so investigating each set of mystery letters, divining the meaning of it all, so next time it comes up I can make an intelligent comment, or at least not stand there with a dumb look on my face.

This blog was inspired by recent discussions about all sky surveys, which naturally all have acronyms for names. My guess is that this will turn into a series of blogs on acronyms related to various aspects of astronomy. If you have a suggestion, leave it in the comments section, please.

Without further ado, here are Simointerpretations of popular acronyms related to astronomical surveys. 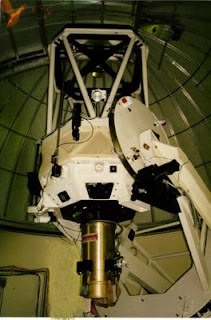 2MASS The Two Micron All Sky Survey is an all sky survey in the near infrared performed by twin 1.3 meter telescopes, one at Whipple Observatory in Arizona and the other at Cerro Tololo Inter-American Observatory in Chile. The University of Massachusetts lead this project. They were responsible for developing the cameras, telescopes and on-site computing systems. The project was funded by NASA and the National Science Foundation. It ran from 1997 to completion in 2001. The resulting 2MASS All Sky Catalog was released in 2003.

The reason it isn't called TMASS is because there was already an all sky survey in the infrared named TMASS done in the 1960's. 2MASS canvassed the sky with about 50,000 times the sensitivity of TMASS. They were able to study galaxies and objects typically hidden from view in optical wavelengths by dust in our galaxy and survey the sky for brown dwarfs and other oddball objects that emit most of their feeble light in the infrared.

To summarize, 2MASS, run by U Mass, funded by NASA and NSF, replaced TMASS by surveying the sky with twin 1.3M telescopes in the near-IR from Mt. Hopkins and CTIO.
Sorry, I couldn't resist.

ASAS The All Sky Automated Survey is an ongoing effort. Four small telescopes in Chile survey the southern sky, from +28 degrees to the south pole, down to about 14th magnitude every clear night in V and I bands. ASAS North, covering the northern sky, should be online soon. 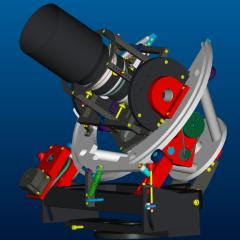 HAT The HAT acronym stands for Hungarian-made Automated Telescope , because it was developed by a small group of Hungarians who met through the Hungarian Astronomical Association (HAA) back in 1999. The scientific goal of the project is to detect and characterize extrasolar planets and bright variable stars. The HAT and ASAS telescopes are very similar in size and appearance, since both are the brainchild of Bohdan Paczynski. The telescope pictured here is the HAT model.

LINEAR Lincoln Near Earth Asteroid Research is a Massachusetts Institute of Technology (MIT) Lincoln Laboratory program devoted to detecting and cataloging Near Earth Objects (NEOs) that threaten Earth. As of the end of 2007, LINEAR had discovered 225,957 asteroids. The twin telescopes located at the White Sands Missile Range in New Mexico also manage to serendipitously discover their fair share of comets, 236 at the end of 2007, which has discouraged many amateur comet hunters. These comets all get the unfortunate, unromantic name of comet LINEAR. 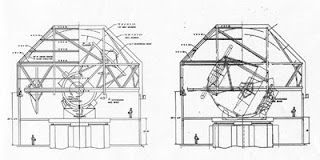 LSST The Large Synoptic Survey Telescope isn't even online yet, but I hear news about it and its development every week. This survey will utilize an 8.4 meter telescope with a 10 square degree field of view to survey the entire night sky visible from Chile once every three nights. The LSST camera will be 1.6 by 3 meters and weigh 2800 kilograms! It will just sit there night after night, cooled to -100C, endlessly shooting 15 second exposures, tracking objects that change or move on rapid timescales, like supernovae, near-Earth asteroids, and as yet to be discovered Kuiper Belt Objects. It will also be used to study faint, distant galaxies and dark matter.

NEAT Near Earth Asteroid Tracking, another program designed to detect and track NEOs, both asteroids and comets. This survey uses two 48" telescopes, one in Hawaii and one on California.

NSVS The Northern Sky Variability Survey is approximately one years worth of data from the ROTSE experiment (yet ANOTHER survey acronym!) used to detect and classify variable stars in the northern sky. 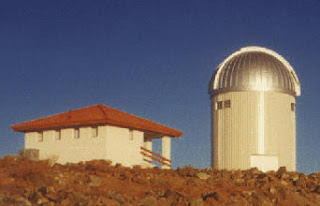 The cameras basically stare at the Large and Small Magellanic Clouds and the galactic bulge, because that's where the most background stars appear from Earth. This experiment has to be considered a smashing success as they have not only detected microlensing phenomena, but discovered thousands of variable stars, dozens of exoplanetary transits, performed precision astrometry and photometry on thousands of stars, and mapped interstellar extinction from dust in our galaxy. By the way, this experiment was also proposed by Bohdan Paczynski. I guess you'd have to call him the father of astronomical surveys, eh?

PanStarrs Sounds like a Howard Hughes space enterprise, doesn't it? This project needs an acronym, because it has way too long a name- Panoramic Survey Telescope & Rapid Response System. 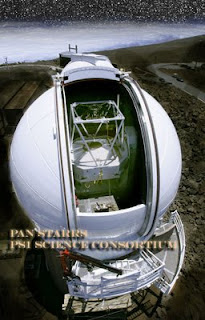 The immediate science goal of Pan-STARRS is to discover and characterize Earth-approaching objects, both asteroids and comets, that might pose a danger to our planet. Sound familiar? Musta' been a whole pot of money available for these type surveys once they became politically correct. "Hey, I see an asteroid. Send me money!"

The huge volume of images produced by this system will also provide valuable data for many other kinds of scientific programs. I hear it referenced in regards to all the transient and variable star data it will produce on a regular basis. The challenge for variable star researchers will be to scan through all the data and find those few interesting objects worthy of follow up observation programs. This scope and LSST are supposed to provide nightly alerts of transient phenomena, as well as terabytes of data. We need to get more AAVSO observers ready, and we need them now! 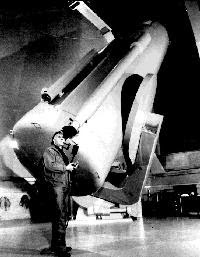 PQ -Palomar Quest Now here is an ongoing survey that I confess I hadn't heard abut until my boss mentioned it in passing. This survey uses the 48" Samuel Oschin telescope at Mt. Palomar to study Quasi-Stellar Objects (QSO), supernovae, variable stars, galactic structure and stellar astrophysics. Significantly, this is the first major digital sky survey designed and implemented in the Virtual Observatory environment. Now there's an interesting topic loaded with acronyms (NVO). Perhaps installment number two in this series.
I just love this picture of Hubble at the finder scope of the 48", conveniently pointed for him to pose at the eyepiece as if he actually guided long exposures with a pipe in his mouth. 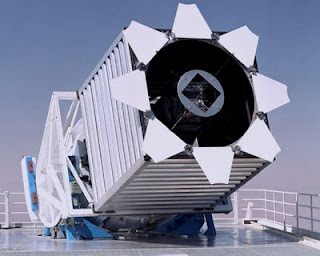 SDSS The Sloan Digital Sky Survey is the "most ambitious astronomical survey ever undertaken. When completed, it will provide detailed optical images covering more than a quarter of the sky, and a 3-dimensional map of about a million galaxies and quasars. As the survey progresses, the data are released to the scientific community and the general public in annual increments."

This 2.5 meter telescope system is straight out of science fiction. The dual spectrographs are fed by fiber optic cables inserted through pre-drilled precision plates in order to measure up to 600 galaxies or stars per exposure. The list of discoveries and science accomplished thus far with SDSS is impressive.

And last but not least...
UCAC Two acronyms embedded in an acronym! USNO CCD Astrograph Catalog. USNO is the US Naval Observatory and CCD is Charged Coupled Device. Egads, layers upon layers of acronyms within acronyms. This is an all sky astrometric (positional) survey measuring the position and proper motion of stars to a very high degree of accuracy. The final catalog should be released in 2008.

If you haven't had enough yet, here is a link to a more extensive, although not necessarily current, listing of astronomical surveys, most with acronyms for names.

There now, don't you feel smart?
The next time someone mentions one of these surveys you'll know what they are talking about. Then you can look around to see who is nodding their head knowingly with that blank expression on their face, and have pity.
Posted by Big Mike

A few suggestions for future blogs on acronyms: LONEOS, CMC, TrES and WASP/SuperWASP.

Interesting that Sky and Telescope has a post similar as your Mike at http://www.skyandtelescope.com/skytel/beyondthepage/25375444.html more acronyms and surveys

>My boss, a PhD astronomer, throws these things around as if they were real words and I should know what they are.

HA! Thanks! At least I know I'm not totally alone at meetings! :-)

And think, I got the damn computer acronyms to deal with as well. :-)