The Perseid Meteor Shower of 2010 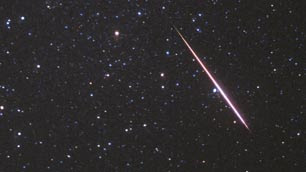 By now you may have heard that the Perseid meteor shower is liable to be a good one this year. We've even gone so far as to change the date of our annual barbecue/star party from September to August 14 to coincide with what we hope will be some celestial fireworks worth staying up for. The Perseid meteor shower is one of the most consistent performers and the meteors produced are some the brightest of all meteor showers. Perseid meteoroids enter the atmosphere at 60 km/sec, and the resulting meteors often leave behind persistent ionization trains.

New Moon occurs just prior to the peak of the shower so there will be no interference from moonlight. Some meteors are only 5th magnitude, or fainter, and can easily be lost to the glare of the Moon for the fleeting seconds we see them disintegrate in the atmosphere. A clear, dark, moonless night is perfect for catching all the meteors, not just the biggest and brightest. 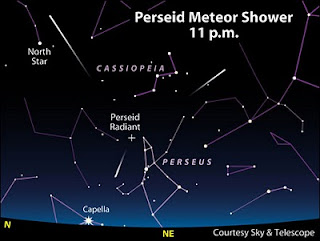 The Perseids get their name from the point in the sky they appear to come from, called the radiant. If you could draw an imaginary line back through the trail of all the meteors you would see them converge on a single point in the constellation Perseus. This is because the Earth is moving through space and encounters a stream of particles left behind from Comet 109P/Swift-Tuttle each year. The radiant is the direction we are heading as we plow through this debris more or less. Very similar to snow rushing at your windshield as you drive through a storm, regardless which direction it's actually going as it falls.

The shower is visible from mid-July each year, with the peak in activity falling between August 9 and 14. During the peak, the rate of meteors reaches 60 or more per hour. The rate is highest after midnight, since the side of the Earth facing into the oncoming dust cloud scoops up more particles as it moves through space.

Watching a meteor shower is fun and easy. You don't need any special equipment. Meteors travel so far across the sky so quickly it is impossible to watch or track them with a telescope or binoculars.  The best way to observe them is just like you would watch a good fireworks display. Set up a blanket, sleeping bag or better yet a lounger, bundle up warm and look up at the sky. You may want to face northeast, towards the shower radiant, but if that view is partially obstructed don't worry, meteors will be seen all across the sky. You can count how many you and your friends see in an hour for fun, or you can set up a more serious meteor counting team and keep accurate records to report to various organizations later.

Astronomers use the term Zenithal Hourly Rate (ZHR) to describe the rate of meteors coming from a particular shower. The ZHR of a meteor shower is the number of meteors an observer would see in one hour under a clear, dark sky if the radiant of the shower were at the zenith. Your mileage may vary, and is almost always lower because the radiant is rarely at the zenith. In 2009, the Perseid peak Zenithal Hourly Rate was about 120, but fainter meteors were washed out by a waning gibbous moon. The ZHR for 2010 is expected to be about the same, peaking in the morning hours of August 12 and 13. Make plans to get away from city lights and go watch one of natures better fireworks displays this month.
Posted by Unknown

Thank you John for pointing that out. I would be happy to publish your comments here if you could just manage to write them without being such a world class dick.

Great website, looks very clean and organized. And very interesting to read Your the article!