Do you know where Pluto got its name? I didn't know until I stumbled on this quite by accident. 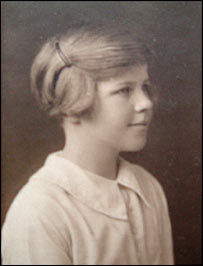 Venetia Burney was born July 11, 1918. On March 14, 1930, when she was only 11 years old, Venetia's grandfather had just read an article in The Times about the discovery of a new planet. Venetia recalled some years later what transpired over breakfast that day.

"It was about 8 o’clock and I was having breakfast with my mother and my grandfather, and my grandfather as usual opened the paper, the Times, and in it he read that a new planet had been discovered. He wondered what it should be called. We all wondered. And then I said, “Why not call it Pluto”. And the whole thing stemmed from that."

Her grandfather forwarded the suggestion to astronomer Herbert Hall Turner, who cabled his American colleagues at Lowell Observatory. Clyde Tombaugh, the discoverer of the new planet, liked the name because it started with the initials of Percival Lowell who had initiated the search for Pluto. On May 1, 1930, the name Pluto was formally adopted.

An interesting side note to this story is that her grandfather's brother, Henry Madan, was the person who suggested the names Phobos and Deimos for the moons of Mars in 1878.

She lived long enough to see Pluto demoted to dwarf planet status, and commented in an interview while the debate about the definition of a planet raged on, "At my age, I've been largely indifferent to the debate; though I suppose I would prefer it to remain a planet." She died on April 30,  2009.

The asteroid 6235 Burney was named for her, and The Student Dust Counter, an instrument on board the New Horizons spacecraft, is also named after her.

Now there is a student competition called Naming X that challenges students to come up with the name of the next planet to be discovered. The deadline for submissions is April 15, 2010 and winners will be announced April 30.

My suggestion for the next planet, or dwarf planet, is Erebus, who was the son of the Greek god, Chaos, and represents the personification of darkness and shadow. You can steal that and enter it in the contest if you like, with my compliments.

This collage shows the relative sizes of the original three dwarf planets (Pluto, Ceres, and Eris) as compared to Earth. It also shows Pluto's large moon Charon (and its two small moons Nix and Hydra) and Eris's moon Dysnomia to scale. 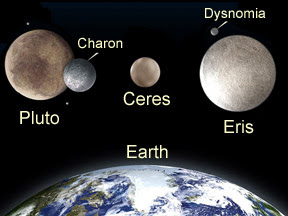 Images courtesy of NASA, ESA, JPL, and A. Feild (STScI).
Posted by Unknown

I came close to visiting Venetia last year but had to delay due to her illness and was in New Zealand when she died as I reported here . A remarkable lady.

New Horizons Principal Investigator Dr. Alan Stern, the world's leading advocate for Pluto and all dwarf planets being classified as a subgroup of planets, visited Venetia several years ago. It's sad she didn't make it to see New Horizons get to Pluto and send back the data that will discredit the flawed IAU definition once and for all.