Here is another on for the Animals in the Dark series-

My neighbors get a chuckle out of me once in a while because I'm such a city boy transplanted to the country. One moonless night in the fall of 2008, I was in the dome observing variable stars. It was after midnight, clear and cool, barely a breeze, peaceful and silent. It was such an awesome night my plan was to stay out until dawn chased me indoors.

Suddenly without warning something made a loud snorting or blowing sound about three feet from my head, just outside the dome.

Not only was I startled nearly out of my boots, I couldn't imagine for the life of me what the heck could stand that tall, just outside the dome, making aggressive, angry snorting sounds for my benefit in the still of the dark night. Then I heard it again, slightly further away, but just as loud. Now I was spooked.

Normally, when I hear critters scuffling around outside the dome I just bang on the walls or rotate the dome and the noise scares them away. So I rotated the dome in the direction of the sound outside and the midnight monster snorted at me again.

At this point all sorts of irrational scary pictures of yeti, werewolves, mountain lions, serial killers and unspeakable horrors began filling my imagination. I didn't move a muscle for at least a half hour. I just sat there silently in the pitch dark waiting for it to either rip open the door and eat me or go away peacefully.

When I was reasonably sure it was safe, I walked to the house about as fast as I could. My perfect night was done.

The next day, I described what had happened to my neighbor, John. A big smile came across his face, and he chuckled slightly as he said, "Yea, Mike. That was one of them killer deer we have around here."

"It was a deer you sissy! They sometimes make a loud blowing sound when they can sense the presence of a man or predator, but can't see it, or tell exactly where it is. Their eyesight ain't that good, but they can smell you. So they make that blowing sound trying to get you to move so they can make out where you are. That way they know which way to run."

"Well it scared the hell out of me," I confessed.

A couple weeks later was the annual stone soup party John holds every year after Halloween. Everyone brings some meat or vegetables to throw in a big cauldron. The broth is flavored by a 6 inch stone that has been used to make soup for I don't know how long. We deep fry a turkey and there are plenty of side dishes and desserts. The eating, drinking and card games go on long into the night.

I took plenty of ribbing that night about the 'killer deer', and 'did I want anyone to escort me home in the dark after the party' and a bunch of other jokes at my expense. They were merciless, and I still hear comments every once in a while.

A few years ago, I planted several arborvitae on a berm I created at the corner of the property to block a couple intruding lights from neighboring properties. I was very careful how I placed them. Slightly staggered and spaced just right, so they would block the stray light as I stood out on the paver pad in front of the door of the dome. They were filling out nicely, and my plan was to top them off at a certain height so they would never block any portion of the sky once they were fully grown in.

I don't have to worry about pruning them now.

This winter, the midnight marauders have come back with a vengeance. It's been cloudy just about every night since early November, so I haven't been outside observing for months. Along with this record stretch of cloudy nights has come record snow fall and bitter low temperatures. The deer are hungry and the ground is snow covered, so anything evergreen above the snow is high on the dinner menu. Unfortunately, that includes my prized arborvitae. 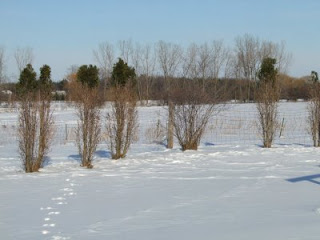 They've eaten all the green off the trees as high up as their necks will stretch, leaving me with some pretty ugly Bonsai arbs. They'll never grow back and fill in to block light, so they are going to have to go on the burning pile in the spring.

If I had been out there observing with any regularity they would probably have been spared this radical pruning job. After all, they've survived winter many times since I planted them. But with no Simo-scent emanating from the dome the deer have been emboldened, and now my property is on the local deer dinner run.

The feast is over, damn it. The next time I am out there observing and hear any of those killer deer in my yard I will be making some aggressive snorting sounds of my own!
Posted by Unknown

Labels: Animals in the dark

We were up at our school's observatory for a lab my first year, and one of the girls went to the car to get something. In the pitch black, she heard a huge *SNORT* and ran back to the dome! They may only be deer, but I would not like to run smack into one in the pitch black!!

What is it with deer and telescopes?

I hate hearing animals in the dark! I know it's probably just a cat, but my mind starts to panic... we do have panthers here in Florida... and even bears occasionally...

Been several times I've run to my van and shut the door. It's usually just when I'm looking at something good.

As a landscape designer with deer eating my precious landscape, I'd suggest some prickly 'ol Colorado Spruce, or black or white spruce.

What's great about 'em is you can also prune them every year to control their height.

The roll off I built two years ago now blocks all the stray light aimed at the dome doorway. So I'll probably move the two amalanchiers somewhere else and get rid of the berm altogether. It's been somewhat of a maintenance hassle anyway. We've got over 3500 sq ft of landscape beds around the place already. I won't miss the arbs.

Animals in the dark, send shivers up my spine too. I know the snorts of deer but you never know where the coyotes are. Coming out of the dome with a pack of coyotes is somthing I would not like to see. I was once doing some CCD imaging in a warm building one cold evening night and someone knocks at the door. Hmmm, Im not expecting anyone, it's a Monday night. I answered and this woman was told by her spirit to come here. She is a therapist and life coach. It was quite scarey but I showed her what I was doing. Her husband has a scope and is into astronomy. I actually felt very uncomfortable that whole night. I like your website Mike.
JR