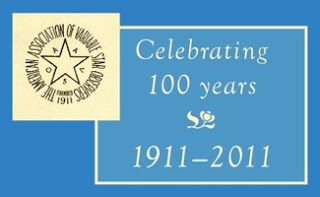 For most of us in the AAVSO, 2011 will hold a special place in our memory as the Centennial Year of the AAVSO. We had fundraising events, special features on our website, contests, two very special meetings and a book published on the history of the AAVSO. We also passed a couple milestones in our database.

It all started early in January as we launched all the special centennial features and pages on our website. We were closing in on 20 million observations in the database, so we held a contest to see who could predict the exact data and time we would cross that magic mark. On February 19, 2011 we passed the 20 million mark just as Chris Watson had predicted. (I came in third in the informal contest for my guess of March 3).

Also in February, an extremely bright outburst of one of the Sloan CVs was detected by Jeremy Shears of the the UK. He discovered SDSS J133941.11+484727.5 in outburst at magnitude 10.5, which indicated to those of us in the know that we had a new WZ Sagittae type dwarf nova in our midst. Exciting news for us CV junkies. This star had already proved interesting by the fact it had a pulsating white dwarf as its primary. So an outburst of this amplitude would provide a chance to investigate how the increase and then decrease in temperature might affect this pulsation.


Our hearts really started to pound in April, when Michael Linnolt of Hawaii, discovered T Pyx in outburst, after a prolonged period of quiet. T Pyx is a recurrent nova that had undergone eruptions every 20-30 years or so. But the last eruption was in 1966, so it was long overdue. Various scientists had put forth theories on why this was so, and even predicted that it would be centuries before it went off again, so of course T Pyx decided to throw a wrench into the whole theory and go into outburst in 2011 after 45 years. This led to a world-wide campaign similar to the U Scorpius campaign the year before. T Pyx is still fading from this most recent outburst as you can see from the AAVSO light curve.


In May, the AAVSO 100th Spring Meeting was held as a joint meeting with the American Astronomical Society (AAS) in Boston. Our meeting started Saturday afternoon with an AAVSO Paper Session and the AAVSO banquet. Sunday included a morning AAVSO Paper Session, an afternoon joint session with the AAS Historical Astronomy Division, and the AAS Welcome Reception.  Monday were two topical plenary talks on variable star science as well as 2 AAVSO-sponsored, variable star special sessions, "Astrophysics with small telescopes" and "Variable stars in the imaging era". I gave a talk on my Z CamPaign during the small telescopes period.  Monday evening we held an open house at AAVSO HQ.


As the end of the epsilon Aurigae eclipse approached in May, Citizen Sky began to concentrate on analysis of the data from the two year long eclipse. One of the terrific results of the Citizen Sky project is this awesome light curve representing observations by thousands of observers around the world in many different wavelengths.


The first week in June I was at the Texas Star Party to give a talk on variable objects in or near deep sky objects. Some of the examples I gave were supernovae in well known galaxies. As if to prove my point, the heavens produced the first of two bright supernovae this year the day after my talk, SN 2011dh in the Whirlpool Galaxy, M51.
In August the second bright supernovae appeared in M101, just in time for my annual starbeque. A lot has been written about SN 2011fe, because it is the brightest and closest supernova to Earth in more than three decades. What's more, the explosion was caught well in advance of maximum light so astronomers have been able to witness almost the entire process in great detail. 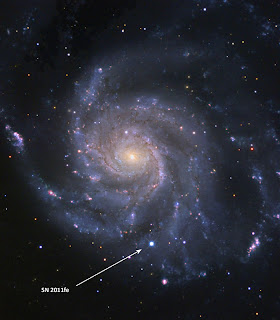 
September brought the discovery of yet another incredibly bright UGWZ dwarf nova by Hideo Nishimura, from Japan. The new variable star was detected at magnitude 11.8 in the constellation Draco. Unfortunately named PNV J18422792+4837425, this variable turned out to be a UGSU, meaning it exhibits "superhumps" in outburst. 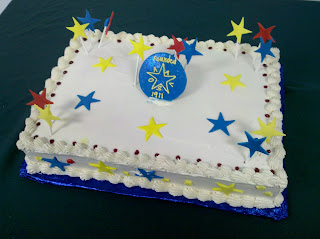 For a whole week in October, the AAVSO celebrated its 100th birthday in style. We dedicated our new headquarters in Cambridge, MA, and celebrated the completion of renovations to the building resulting in a new conference center, historical archives, a guest suite for visiting astronomers, a residence for the Director and extensive improvements to the exterior of the building. We held an extended meeting featuring historical and scientific talks, and enjoyed a terrific closing banquet and awards ceremony featuring renowned astronomer Owen Gingerich, himself a lifetime AAVSO member.


As if that weren't enough, on October 25th Michael Linnolt hit pay-dirt again when he detected the long quiescent BW Scl in outburst, resulting in yet another world-wide campaign to observe this first time ever outburst.


As we raced towards the finish line, the "obzometer" on the International Database turned over once again as we passed the 21 million observation mark in December.
No one knows what 2012 has in store for us, but you can be sure the Universe will have its share of surprises and wonders. The beauty, mystery and unpredictability of her variable stars is what keeps me and others coming back for more, year after year.