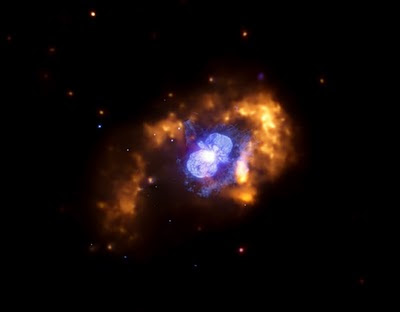 Credit: X-ray: NASA/CXC/GSFC/M.Corcoran et al.; Optical: NASA/STScI
Eta Carinae is a beast of a star. At more than 100 solar masses and 4 million times the luminosity of our Sun, eta Car balances dangerously on the edge of stellar stability and it’s ultimate fate: complete self-destruction as a supernova. Recently, Hubble Space Telescope observations of the central star in the eta Carinae Nebula have raised an alert on eta Car among the professional community.

What they discovered was totally unexpected.  “It used to be, that if you looked at eta Car you saw a nebula and then a faint little core in the middle” said Dr. Kris Davidson, from the University of Minnesota. “Now when you look at it, it’s basically the star with a nebula. The appearance is completely different. The light from the star now accounts for more than half the total output of eta Car. I didn’t expect that to happen until the middle of this century. It’s decades ahead of schedule. We know so little about these very massive objects, that if eta Car becomes a supernova next Thursday we should not be very surprised.”

In 1843, eta Carinae underwent a spectacular eruption, making it the second brightest star in the sky behind Sirius. During this violent episode, eta Car ejected 2 to 3 solar masses of material from the star’s polar regions. This material, traveling at speeds close to 700 km/s, formed two large, bipolar lobes, now known as the Homunculus Nebula. After the great eruption, Eta Car faded, erupted again briefly fifty years later, then settled down, around 8th magnitude. Davidson picks up the story from there. 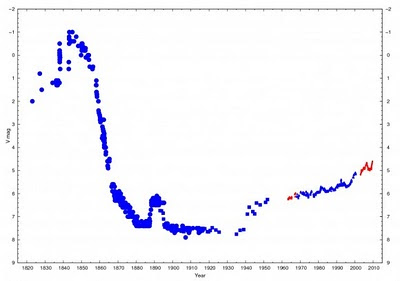 This light curve depicts the visual apparent brightness of Eta Car from 1822 to date. It contains visual estimates (big circles), photographic (squares), photoelectric (triangles) and CCD (small circles) observations.
All of them have been fitted for consistency of the whole data. Red points are recent observations from La Plata (Feinstein 1967; Fernández-Lajús et al., 2009, 2010). Used by permission.
“Around 1940, Eta suddenly changed its state. The spectrum changed and the brightness started to increase. Unfortunately, all this happened at a time when almost no one was looking at it. So we don’t know exactly what happened. All we know is that by the 1950’s, the spectrum had high excitation Helium lines in it that it didn’t have before, and the whole object, the star plus the Homunculus, was gradually increasing in brightness. In the past we’ve seen three changes of state. I suspect we are seeing another one happening now.”

During this whole time eta Car has been shedding material via its ferocious stellar winds. This has resulted in an opaque cloud of dust in the immediate vicinity of the star. Normally, this much dust would block our view to the star. So how does Davidson explain this recent, sudden increase in the luminosity of eta Carinae?

“The direct brightening we see is probably the dust being cleared away, but it can’t be merely the expansion of the dust. If it’s clearing away that fast, either something is destroying the dust, or the stellar wind is not producing as much dust as it did before. Personally, I think the stellar wind is decreasing, and the star is returning to the state it was in more than three hundred years ago. In the 1670’s, it was a fourth magnitude, blue, hot star. I think it is returning to that state. Eta Carinae has just taken this long to readjust from its explosion in the 1840’s.”

Can amateur astronomers with modest equipment help untangle the mysteries of eta Carinae? Davidson think so, “The main thing is to make sure everyone in the southern hemisphere knows about it, and anyone with a telescope, CCD or spectrograph should have it pointed at eta Carinae every clear night.”
Posted by Big Mike